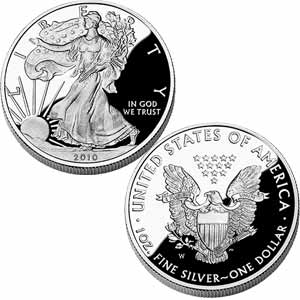 If there was any doubt that there’s a disconnect between the price of silver in the commodities market and demand for silver bullion, that doubt has all but been erased with the announcement from the U.S. Mint yesterday that sales of silver eagles for the year have eclipsed the 40 million mark; setting a new annual record.  The previous record, which was set in 2011, was 39.869 million ounces.  If the sale of silver eagle coins remains on its current torid pace, we’ll likely see sales approaching 48 million ounces by year end.

Ironically, sales have reached an all-time high during a year in which the performance of silver has been its worst in recent memory, with a year to date loss of over 30%.  We have previously reported that mining companies are having a difficult time turning a profit with the price of gold and silver at such depressed levels, which has resulted in the closing of more costly and less productive mines.  Gold and silver prices are rapidly approaching the price of production, which should help to create a floor in the price of precious metals.

The closure of the mines will restrict new supply from being brought to market, which will inevitably cause the price of silver to bounce from its current levels, so if there was ever a time to purchase silver bullion in the form of coins, bars, and rounds, the time is now.

At the time of this writing, silver is seeing a bit of a bounce in anticipation of Janet Yellen being confirmed as the next Chairman of the Federal Reserve.  Excerpts from a prepared statement have been leaked, which point toward a continued loose monetary policy, which in addition to supply restrictions, should help to boost silver prices from their current levels.