2021 Design Changes to the American Gold and Silver Eagles

2021 marks the U.S. Mint’s release of new reverse designs for both the Gold Eagle and Silver Eagle coins. These changes denote a new standard design for both coins, replacing the original reverse eagle design. Preview what you can expect from the new coins.

Celebrating the 35th Anniversary of the American Eagle Coin Program 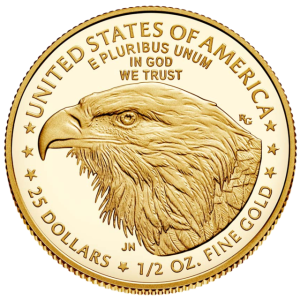 The American Silver Eagle coins’ new design boasted a triumphant American bald eagle carrying an oak branch as it soars through the air. Curved around the rim, the inscriptions read “E PLURIBUS UNUM,” the national motto, in a sleeker, more modern design now located above the weight of the coin. Jennie Norris created the new Gold American Eagle design and has previously designed coins for the Royal Canadian Mint. Her work for the submission of the new reverse design was judged by an expert panel known as the Citizens Coinage Advisory Committee.

Emily Damstra is credited with the new reverse design for the it, which features a striking profile of the American bald eagle, with the surrounding inscription reading “UNITED STATES OF AMERICA,” “E PLURIBUS UNUM,” and “IN GOD WE TRUST.”

The original reverse Gold and Silver Eagle designs were created by American sculptors Miley Tucker-Frost and John Mercanti, respectively. These are among the most popular coins worldwide and, since the release of the new versions, are now referred to as Type-1 coins. Millions of Type-1 American Gold Eagles and hundreds of millions of Type-1 These have been produced and sold since the release of these coins. It’s important to pay proper homage to the original designers, without whom the American Gold and Silver Eagles wouldn’t be the most popular one-ounce bullion coins in the market today.

Up until 2006, these were the nation’s only official investment-grade gold bullion boasting weight, content, and purity guaranteed by the United States Government. Each American Eagle Gold bullion coin is 22 karats, and they are considered legal tender. 2006 marked the release of the American Gold Buffaloes, but to this day, the American Gold Eagle remains the most popular one-ounce gold coin in the United States. The American Silver Eagle continues to remain the only investment-grade one-ounce silver coin produced by the U.S. Mint.

Atlanta Gold & Coin Buyers is a top-rated coin dealer based in Metro Atlanta. We post all of our coin prices online and offer mail-in coin appraisal services to allow interested sellers throughout the nation a chance to work with our knowledgeable numismatists. Complete our online contact form now to learn how you can receive an accurate appraisal of your gold, silver, palladium, or platinum coins and bullion.

Tony Davis
PrevPreviousThe Price of Gold: Why Did It Hit an All-Time High in 2020?
Next4 Factors that Determine the Price of Numismatic CoinsNext