The $3 Indian Princess gold coin is among the most unusual types of coinage in U.S. history. Not only does this coin have an unusual denomination, but it also has an intriguing design. Just as appealing for coin collectors is the low mintage of these pre-1933 gold coins.

Here’s some information you need to know before you buy or sell these rare coins. 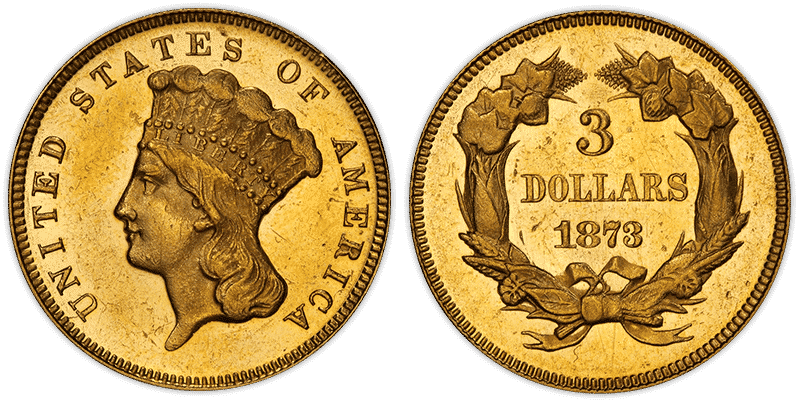 The $3 Indian Princess gold coins have a strange history. In 1832, a New York Congressman suggested adding smaller coins to the then $10 Eagle gold coins to promote the circulation of U.S. coins. Then, the U.S. Congress passed the Coinage Act of 1834, but it did not include authorization for a $3 coin.

That might have been the end of the $3 coin, but then, something seemingly unrelated revived the idea. Postage stamps were reduced to 3 cents each in 1851. The 3-cent pieces were authorized to make buying these stamps easier.

A new bill in 1853 authorized a 3 dollar gold coin. The reason for the new denomination seemed to be to facilitate the purchase of sheets of 3-cent stamps.

Although the story above has been told by many numismatic historians, not all numismatists agree. Some say that the entire reason for the coin was simply that there was an abundant supply of gold from the Gold Rush in California.

Mint engraver James B. Longacre was tasked with creating a design for the $3 gold coin. His first assignment did not include directions about what kind of design to create. Many earlier coins had used Roman and Greek-style figures, but Longacre thought this coin should have an American image.

Longacre’s obverse design featured Lady Liberty, basing the image on a statue called “Crouching Venus.” The engraver gave Liberty a type of headdress or bonnet that was popularly associated with Native American women at that time. Around the Indian Princess’s head, the words “United States of America.”

The reverse of the coin was nearly like earlier coins created by Longacre. It had an agricultural wreath, with the denomination of “3 DOLLARS” and the year situated between the arms of the wreath.

Any time you are thinking of buying or selling gold coins of any kind, you need to be sure the coin you have or are considering matches the true specifications for that type of coin. Otherwise, it could be a counterfeit. The same is true of the $3 Indian Princess gold coin.

Measure, weigh and examine the coin closely to be sure you know what it is.

The $3 Indian Princess gold coin is known for its overall low mintage. There were also some varieties that are now very well known. Here are some of the more valuable coins to watch for as you build your collection or help someone else build theirs.

The most eye-catching difference among all the $3 Indian princess gold coin specimens is the two sizes of the lettering on the word “DOLLARS.” Small lettering was used for 1854, the coin’s first year of production. However, the coins after that, from 1855 to 1889, had larger lettering.

As with nearly any type of coin, there are dates of the $3 Indian Princess gold coin that are rarer than others. These coins tend to be more valuable if their condition warrants it.

Here are some of the rarest in this series of coins:

Things to Remember When Buying or Selling These Coins

Before you buy or sell a rare coin, be sure it is exactly what it should be. Examine it closely and compare it to images you see at reputable coin dealer sites or coin books. You may come across fake coins, especially when you are trying to buy a rare coin like this one.

Surprisingly, despite the rarity of $3 Indian Princess gold coins, the demand is relatively low. Therefore, they may not be as valuable as you would expect based on their rarity.

If you happen to have a questionable coin or one of the rare coins highlighted above, you may want to have to sent to a third party grading service, such as NGC or PCGS.

A PCGS or NGC verified, and graded coin will not only be assured of authenticity but also know the exact condition.

How to Find an Expert in Rare U.S. Coins

Understanding every fact and detail about rare coins like the $3 Indian Princess gold coin is a task best left to experts. The team at Atlanta Gold & Coin Buyers can guide you through a sale or purchase so that you get the outcome you are looking to achieve.

We also have many excellent gold coins in our inventory, available for purchase now. Plus, if you have any questions, we can point you to the answers you seek. Contact us today to find out how we can assist you!