As a coin dealer that specializes in large collections, we see thousands of paper bills/ currency per year. One easy way to determine if your paper money has more value than what is printed on the bill is based on the size of the bill. Most people today wouldn’t believe that there use to be a $1,000 bill in circulation.

We’re not referring to the denomination or amount printed on the bill, but rather the actual physical size.

Most Americans may not even know the United States used to print physically larger size bills until 1923. So, it’s a safe bet that if you have one of these larger bills, no matter the denomination, that it likely has some value above face value. In fact, in some cases, possibly quite a lot more!

The US Treasury, technically the Bureau of Engraving and Printing (BEP), reduced the size of our paper money by 30% beginning in 1928 to reduce manufacturing costs. These are the same size bills that we still use today.

Since most paper currency produced in 1928 and later was produced in such large quantities, it tends to have nominal value. However, there are a few exceptions.

In this piece, we’ve highlighted six United States bills issued in 1928 and later that are collectible and that can be quite valuable. If you’re new to paper currency collecting and are looking for a quick primer on the subject, we recommend that you check out this article.

Please note that for purposes of this article, we’re going to limit our discussion to small size circulated bills as opposed to error, variety, or certified uncirculated bills, which can also be quite valuable.

Students of history will recall that FDR signed Executive Order 6102 in 1933 making it illegal for U.S. Citizens to own gold coins. This order also applied to gold certificates.  The last gold certificates were issued in 1928 and were redeemable for U.S. gold coins up until 1933. While we technically remained on the gold standard until 1971, only foreign central banks could redeem gold certificates for gold bullion after 1933.

Denominations of gold certificates from 1928 include $10, $20, $50, $100, $500 and $1,000, but are most seen in the $10 and $20 size. These bills can be identified by the gold seal on the bill and the words “gold certificate” to the left of the portrait. While the value of these bills tends to be less than the larger size bills, they are still collectible and even in the smallest denominations, trade for upwards of $100, or more.

On occasion, these bills are confused with the 1934 and 1935 North Africa emergency issue bills, but there are a couple of differentiating factors, which we’ll discuss next.

The North Africa series of emergency use bills dated 1934 and 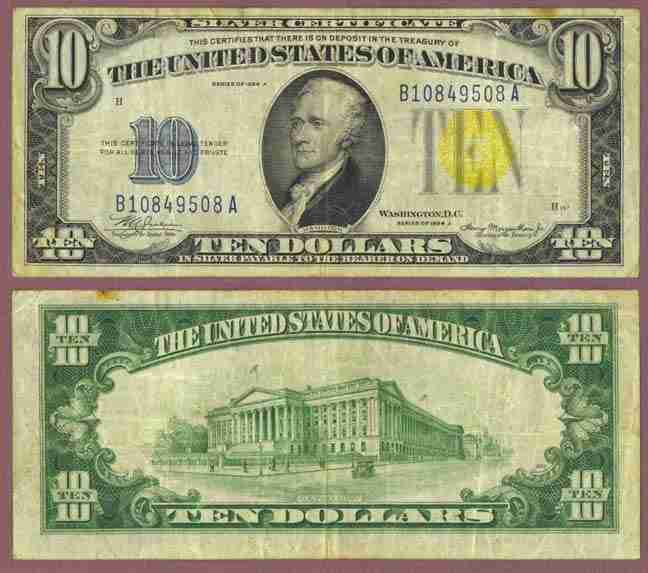 1935 were issued during World War II to be used by our troops during the war. They were produced in $1, $5 and $10 denominations and included a yellow seal, like gold certificates.

However, on the opposite side of the bill was a blue seal and a notation at the top of the note indicating that it was a silver certificate.

They were used to pay our troops during the war but were also a strategic way to minimize risk if our troops were captured or if we lost the war, as these special issue bills could be demonetized, making them worthless.

Fortunately, we won the war and since the production of these bills was somewhat limited, they are now collector items that sell at a decent premium over their face value.

As you would expect, the higher the denomination, the greater the value. Most of these silver certificates trade in the $20 – $60 range, but high-end examples, star notes, and/or certified bills can trade in the hundreds of dollars. 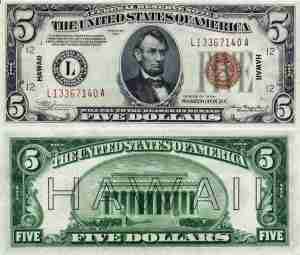 The Hawaii emergency use bills, dated 1934 and 1935, were also issued in response to World War II and as a fail-safe in the event the enemy seized our currency. Following the attack on Pearl Harbor, all paper currency from the island of Hawaii was recalled and overprinted with a brown seal on the front and the word “Hawaii” on the reverse.

They were issued in denominations of $1, $5, $10 and $20. The $1 bill was a silver certificate while the other bills were Federal Reserve Notes.

Millions of these notes were produced, but much like the North Africa bills, became collector items following the defeat of Germany in World War II. The most common bills are $1 bills and the least common are $5 bills. They trade at similar ranges to the North Africa emergency use bills and have values reaching into the hundreds of dollars for star notes and high-end certified notes.

Because of their brown seals, these bills are occasionally confused with 1929 U.S. Banknotes or National Currency. We’ll discuss the difference between the bills below as we highlight National Currency notes.

U.S. national bank notes or national currency were issued by National Banks chartered by the U.S. government in denominations of $5, $10, $20, $50 and $100. They all have specific charter numbers on the front of the bills identifying which National Bank produced the notes.

These are Federal Reserve notes that have the words “National Currency” stamped across the top, and for the most part were issued in larger quantities.

In 1929, the twelve Federal Reserve Banks all produced national currency, but they were also produced by some relatively small National Banks in limited quantities.

A good rule of thumb is that if your note was produced by one of the 12 Federal Reserve Banks, then it probably has nominal value above the face value.

Depending on the size or denomination of the bill, it could be anywhere from 1.5 to 5 times the value, if in average circulated condition. However, the value can reach into the hundreds or even thousands of dollars, if from a smaller or lesser-known bank in high end condition.

These bills are highly collectible, especially if you’re able to find one from your hometown. We’ve dealt in many National Bank Notes over the years from smaller towns, some of which only have a few examples that are known to exist. As with anything else involving coins or currency, the smaller the amount produced, the higher the value. 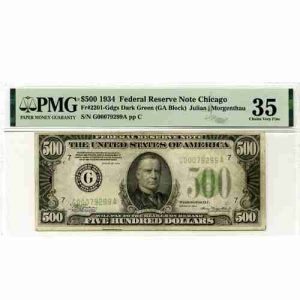 They feature President William McKinley on the obverse, or the front, of the bill. Gold certificates and Federal Reserve Notes were issued in 1928, but the focus for this section is only on the Federal Reserve Notes. These notes were produced in fairly large quantities, but because they no longer circulate, are sought after by both investors and collectors alike.

While these bills are no longer being produced, they’re still considered legal tender and can be used as currency. However, they have much more value as collector pieces. Values can range substantially for these bills, anywhere from 1.5 times the face value to upwards of thousands of dollar 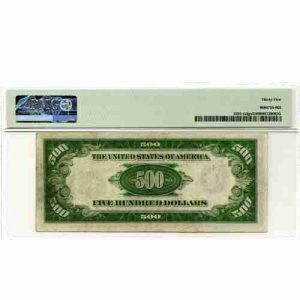 s. Many bills have pinholes from being pinned up on corkboards while other examples have multiple creases and folds from being in purses and wallets.

Better condition bills, especially those without pinholes, creases and nice corners will trade for at least twice the face value.

Fun fact: Use of $500 bills was discontinued due to lack of use and concerns they were being used for illicit activities, such as money laundering. Those that were deposited or redeemed at banks were destroyed, so the survivorship of these bills is much less than the original mintage.

While $500 bills are impressive, very few people, outside of the coin and currency markets, have even seen a $1,000 bill in person. As with the $500 bill, we’re only discussing the Federal Reserve Notes as opposed to gold certificates.

While a $1,000 bill today might not seem that valuable, considering that we’re experiencing high rates of inflation and everything is becoming more expensive, it was quite valuable in the 1930’s. As a point of reference, a $1,000 bill in 1934 would be worth roughly $22,000 today when adjusted for inflation.

I’m sure it’s safe to say that not many people were carrying around this large of a bill regularly. In fact, most $500 and $1,000 bills were primarily used for large transactions between banks.

The $1,000 bills were discontinued for the same reasons as the $500 bill, but like the $500 bill, $1,000 bills are still legal tender and can be used as currency. However, considering these bills often trade at a minimum of 1.5 times their face value, if not more, you are much better off selling it as a collectible piece than using it as standard currency.

To recap this piece, we highlighted six United States bills issued in 1928 or later that have greater than face value, and in some cases, significant value.

The first bill on this exclusive list is the 1928 gold certificate, which trades at multiples of its face value. Technically, it was supposed to be turned in following the issuance of Executive Order 6102, but clearly, not everyone complied.

Also on this list are the North Africa bills, which like gold certificates, have a gold stamp or seal. These bills have historical significance, as they were World War II emergency issue bills and make a great addition for collectors of World War II memorabilia.

Same goes for emergency issue Hawaii notes, which were also issued in response to World War II following the attack on Pearl Harbor.

We then addressed National Currency or National Bank Notes and the potential values for these bills; especially from smaller National Banks that produced a limited number of bills.

We then wrapped it up on a “high-note” with the $500 and $1,000 Federal Reserve Notes. Although these bills were worth more than $10,000 and $20,000 when priced in today’s dollars, they weren’t commonly used by the general public which makes them all that more desirable.

We hope you found this article to be helpful and welcome you to contact Atlanta Gold & Coin Buyers if you have any of these bills in your collection, or for that matter, larger size bills issued in 1923 and earlier. We’re not only coin experts, but regularly deal in paper currency as well and offer competitive rates on both coins and currency.

Till next time, happy treasure hunting!

Tony Davis
PrevPreviousSell a Coin Collection – Why Using a Local Coin Dealer is Best
NextU.S. Silver Coin Market: How Big or Small is it from an Insider’s PerspectiveNext