On first consideration, American Eagle 1 oz silver coins may seem like a straightforward investment option. In fact, they may even seem a bit pedestrian. After all, millions have been made, and they are still being produced. They just don’t seem to carry the same mystery and enchantment of a 19th century silver dollar.

Yet, when you look more closely, you’ll find that the American Silver Eagle coin is quite fascinating, and in its relatively short lifespan, already has amassed an interesting history. We’ll share with you six interesting facts on the American silver eagle, some of which are sure to surprise you.

1. It all started with a stockpile.

The American silver eagle bears the elegant Adolph A. Weinman design from the earlier Walking Liberty half dollar with a side profile of Lady Liberty on the obverse with the inscription “In God We Trust,” and the triumphant heraldic eagle design by John Mercanti on the reverse. It’s truly a beautiful coin. So, it might surprise you to know that this coin program began in a very practical way to dispose of excess silver.

The United States government had a huge stockpile of silver, which was well over 100 million ounces. Many lawmakers believed that this excess precious metal was depressing the price of silver. After much deliberation, Congress eventually approved a coin program in 1985 with the primary intent of disposing of the extra. The act authorized the issuance of gold and silver eagles.

The program began in 1986, and it took until 2002 for the silver stockpile to be depleted. At that point, the American Silver Eagle program could have been ended for good. However, the coins were so popular that the United States Mint began buying silver to produce the coins and keep the program going. 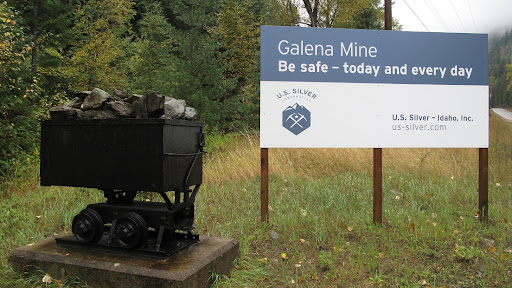 Per the Coin Act of 1985, American silver eagles are only to be produced with U.S. mined silver. Most of the silver mined in the U.S. is from Alaska, Nevada and Idaho. Once the silver is mined, it is fabricated into blanks or planchets, which are shipped to the U.S. Mint from private producers.

Only a select number of silver fabricators are tabbed with the important task of supplying the U.S. Mint with silver planchets. One of the largest suppliers of silver planchets for the production of American silver eagles is Sunshine Minting. They are also one of the most recognized producers of silver bullion rounds and bars.

3. The American Eagle 1 oz. Silver coins may be the most collected U.S. silver dollar.

When you think of collectible silver coins, the American Eagle 1 oz silver coins may not be the first that comes to mind. In fact, these coins are commonly referred to as “bullion” coins. Bullion simply means that the value of the coins are primarily derived from the underlying metal content as opposed to their collectible value.

If you’re a collector, you might instead gravitate more toward Peace and Morgan dollars, which were produced in 1935 and earlier. However, at least one numismatics expert, Michael “Miles” Standish, has stated that American Eagle silver bullion coins are probably the most collected of all U.S. silver dollars.

With between 400,000 and 500,000 million minted and many more millions produced on an annual basis, there are certainly a lot of these silver coins to collect. Many collectors purchase American silver eagles by the tube or in bulk, such as a monster box (500 count green boxes), and investors add them to their precious metals IRAs as a hedge against inflation.

Even though a decent bit more Morgan dollars were minted than American silver eagles – about 657 million in total, it’s estimated that only about 275 million remain. So, while it’s true that Morgan dollars are interesting and worth collecting, it’s nearly certain that more people have American Eagle 1 oz silver coins in their collections.

When the COVID-19 pandemic arrived in the United States of America, life changed dramatically in nearly every way. The United States Mint’s production of American Eagle 1 oz silver coins was affected, as well. Fortunately for some collectors, this situation led to an issue of rare coins.

Meanwhile, the Philadelphia Mint was tasked with taking over some of the load. There, about 240,000 American Silver Eagle 1 oz silver coins were produced during the month of April. These are some of the rarest silver eagle coins and are the lowest minted bullion silver eagles.

In fact, the mintage is on par with some of the lowest produced proof silver eagles. Now certified by coin grading companies as “Emergency Issues,” these coins have become a much sought-after prize. Depending on the grade, they can sell for well over $100, and will likely be collected for the foreseeable future due to the historical events that led to the production of these coins.

From 1986 to mid-year 2021, the American eagle 1 oz silver coins bore the same design. However, in 2021, the U.S. Mint produced silver eagles with another design in addition to the original type.

The 2021 coins with the first design, which are now referred to as “Type 1 silver eagles,” feature a refreshed image of the Adolph A. Weinman Walking Liberty Half Dollar. This obverse design was also

retained for the obverse of the newly designed coins.

It’s the reverse designs that make the difference. Through mid-year 2021, all the silver Eagle coins bore the John Mercanti image of the heraldic eagle grasping an olive branch and arrows. After that, however, the reverse side of the coins were redesigned.

Created by Emily Damstra, the new reverse shows an eagle coming in for a landing. The eagle carries a branch as if to add it to a nest below.

The reverse of both versions also has inscriptions of United States of America, 1 oz. Fine Silver, One Dollar, and E Pluribus Unum. If the coin has a mintmark, such as “S” for San Francisco, it is also on the reverse. Not surprisingly, the new design is referred to as a “Type 2” silver eagle.

Interestingly enough, the Type 1 silver eagles became more popular after the introduction of the Type 2 coins, as the mintage of these coins was relatively small compared to the number produced in recent years.

The American eagle 1 oz silver coin is U.S. legal tender and is guaranteed by the United States government to contain one troy ounce of 99.9% pure silver. So, in terms of pure investment, it naturally has the value of the spot price of one troy ounce of silver plus the coin dealer’s premium or mark up.

In fact, 1999 wasn’t a particularly low mintage year, with the production of approximately 7.5 million coins. Relative to recent production numbers, it seems low, but at the time, it had the second highest production run of silver eagles produced in the first two decades of their existence.

So, what made this coin so valuable? First, the coin received an MS70 grade, indicating the coin’s perfect condition. This was rare for 1999 because there were many poorly struck coins that year. Additionally, milk spots (milky-like discoloration of the coins) were common on 1999 silver coins, and this reduced their grade.

Per the most recent NGC and PCGS population reports, there have only been 481 & 62 1999 silver eagles, respectively, that have received a grade of MS70. This is compared to over 100,000 coins that have been submitted to these third party services for certification. Therefore, due to the rarity, their value is extremely high.

If you are interested in American Eagle 1 oz silver coins, you may want to consider adding a few tubes, some proof silver eagles, or even a monster box to your collection. Buying and selling Silver American Eagle coins is simple when you rely on the best coin dealers. We can help you reach your collecting or investing goals with fair rates and transparent pricing. Contact us today to learn more about these fascinating coins from the coin experts at Atlanta Gold & Coin Buyers.

Tony Davis
PrevPreviousAre Certified Coins Worth The Expense? An Evaluation By Type of Coin
NextA Look at 5 of the Most Popular World Silver Bullion CoinsNext