Unfortunately, there aren’t as many Peace silver dollars that fit the same criteria, but that shouldn’t come as much of a surprise. The reason is Peace dollars were only produced from 1921 – 1935 while Morgan silver dollars were minted from 1878 – 1904 and again in 1921. 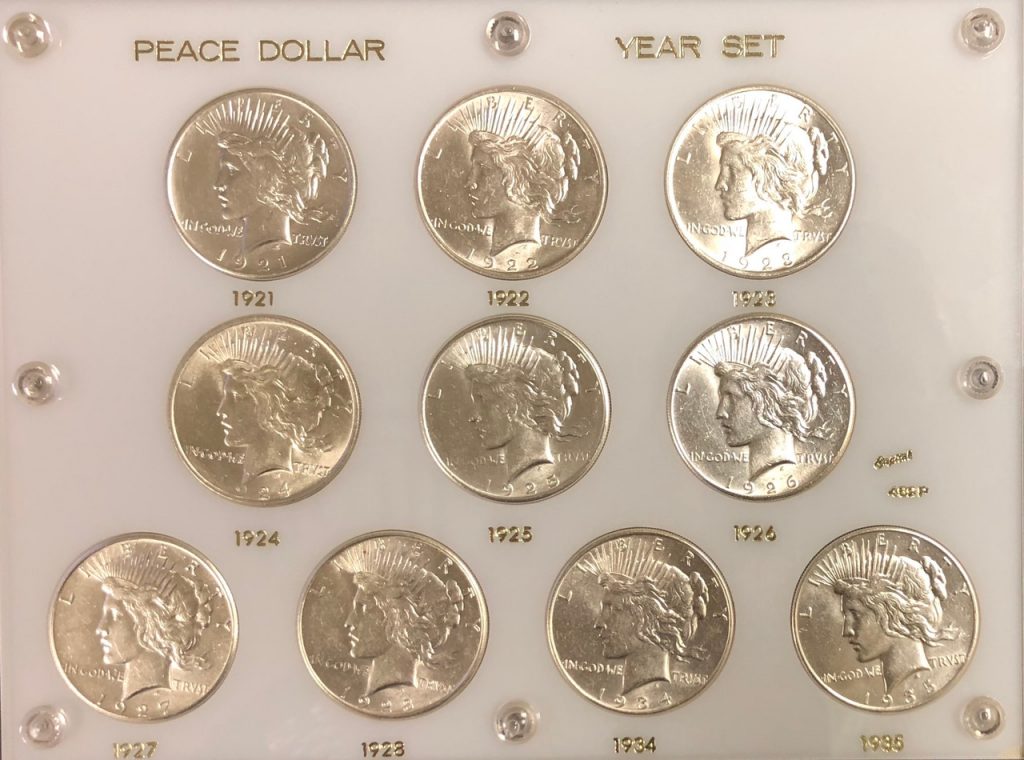 A simple calculation shows that Morgan silver dollars were produced at a multiple of 3.4 times the production of Peace silver dollars. Using that logic, we would expect to only come across three or four Peace dollars that are common date coins in circulated condition, but key date coins when uncirculated.

Fortunately, this isn’t the case. Rather, we’ve identified 6 coins that fit the bill.

Keep in mind that our list doesn’t include the 1921-p and 1928-p Peace dollars, which are key date coins.

Rather, we’re including those coins that have a current Greysheet coin dealer newsletter value of $40 or less in fine condition and $200 or more in MS60 condition.  We imagine that you can guess at least one of these coins, but you might be surprised at some of the other coins that made the list.

Surprisingly, five of the six coins that we’ll highlight in this article all have prices within $200 of each other at the MS64 level, which is uncommon. It just goes to show the uniformity and consistent demand across the board for these coins.

We’ve listed the coins in chronological order and have included some specifics about each coin to help provide some perspective as to why the coins are as valuable as they are. 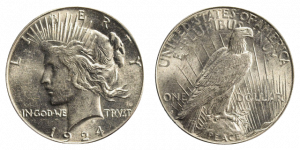 The first coin to make our list is the 1924-s Peace silver dollar. If you’ll recall from our previous Morgan silver dollar article, quite a few coins from the San Francisco Mint made our list. This had to do with the weak strike of the coins.

We’ll see if the San Francisco Mint cleaned up their act with Peace silver dollars!

A total of 1.72 million Peace dollars were minted by the San Francisco Mint in 1924. When compared to our Morgan silver dollar article, we see that this is toward the lower end of total coins produced. Even though only 1.72 million coins were struck, the current Greysheet list price for this coin is $30, which is about the average market price for a circulated condition Peace dollar.

However, when this coin is in MS60 condition, which is the lowest uncirculated grade available, we see the price jump to a list price of $270. It only goes up from there.

When viewing the NGC and PCGS census data, we see that slightly over 5,700 coins have been slabbed and certified between the grades of MS60 – MS63. This is only .003% of the total coins produced. Granted, not all the coins produced have been submitted to NGC or PCGS, not to mention, some were probably melted down in 1918 in response to the passage of the Pittman Act, but this gives you a general sense of the population of uncirculated coins. 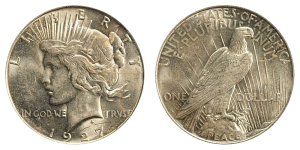 In general, Peace dollars produced from 1927 – 1935 trade at slightly higher rates than 1922 – 1926 Peace dollars, even in circulated condition since the production of these coins was slightly less.

That being said, a total of 1.26 million 1927-d Peace dollar coins were produced.

When we compare this figure to our previous Morgan silver dollar article, we see that only the 1892-p Morgan silver dollar had a lower mintage. Even with a relatively low mintage of coins, the 1927-d Peace dollar still only has a list price of $28 in fine condition per the most recent Greysheet. This is an indication that the coin is still plentiful in circulated condition.

A look at the most recent population report reveals that approximately 5,900 coins have been certified in the MS60 – MS63 range by the leading grading services. Interestingly, this is a higher census than the 1924-s Peace dollar, but the price is still higher. This is likely being driven by the overall lower mintage of this coin relative to the 1924-s dollar. 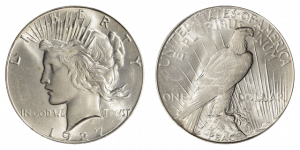 1927 was apparently a good year for Peace dollars, as this is the second coin from this year to

make the list and notably, the second coin issued by the San Francisco Mint. As you’ll see below, the 1927-s Peace dollar mirrors the 1927-d Peace dollar in many respects, save for a few minor details.

The most obvious difference between the two coins is the number produced. A mere 866,000 1927-s Peace silver dollars were produced. This is the third lowest mintage of the Peace dollars series, only behind the 1927-p and 1928-p dollars. In fact, it was produced in smaller quantities than the 1921 Peace dollar, which frequently trades above $100.

At the time of this writing, approximately 6,250 coins have received an MS60 – MS63 by NGC and PCGS. This figure is relatively close to the number of 1927-d coins certified in the same range. Considering the similar values of the two coins, it appears as though it’s equally difficult or easy (depending on your perspective) to receive an uncirculated grade on a 1927-d and 1927-s Peace dollar. 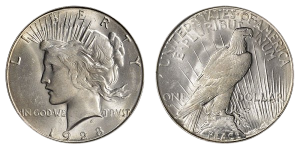 The 1928-s Peace silver dollar is the third San Francisco-issued Peace dollar to make our list. It’s not uncommon for folks to call believing that they have a 1928-p Peace dollar, as the mint mark on this coin is very small and hard to detect unless you know where to look and possibly have a loupe or some other type of magnifier. That being said, it’s still a formidable coin in its own right.

This coin has a little larger mintage than the previously highlighted coins, except for 1924-s, with a total production of approximately 1.6 million coins.  This may sound like a substantial number of coins, but when we compare it to the Morgan silver dollars that we previously highlighted, it’s still a relatively small amount.

Pricing on this coin in fine condition is $28 with a nice run up to $245 in uncirculated condition. Par for the course, we see a more substantial increase between the MS63 and MS64 grades, with a $700 jump between the grades. In fact, it’s the third most valuable Peace silver dollar in the series at the MS64 level, only surpassed by the 1921-p and 1928-p Peace dollars.

A glance at the NGC and PCGS population reports reveals that approximately 7,550 coins have received an MS60 – MS63 grade as of this writing. This compares to a total submission of approximately 16,000 coins, which is a bit higher than some of the other coins we’ve highlighted.

Of note, is that only about 100 coins have received an MS65 grade, which is reflected in the pricing with a list price of a whopping $15,000! Only the 1925-s Peace dollar in the same grade is more valuable. 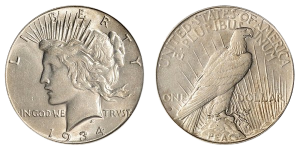 Earlier in the article, we alluded to a coin that you might have guessed made the list. While the 1934-s Peace silver dollar isn’t a key date, as is evidenced by its $40 price tag in fine condition, the coin is a semi-key date coin in slightly higher condition and is the most valuable coin in MS60 condition by over $2,000!

A little history on the 1934-s Peace dollar. The mintage is relatively low at approximately 1 million coins, but the coin was notorious for having a weak strike. In fact, it’s uncommon to see a raw 1934-s Peace dollar in high-end condition. We’ve purchased numerous complete Peace silver dollar collections over the years and inevitably this is the worst condition coin in the set.

This coin differs from the other Peace dollars we’ve highlighted in that the price begins to increase at the XF level. An XF or extremely fine coin is one with nice details, defined hairlines, some feathers on the wing of the eagle on the reverse and possibly some mint luster.

Pricing only increases from there and jumps a significant amount from the AU50 to AU58 grades. From there, we see the price nearly double again from AU58 to uncirculated with a current Greysheet price of $2,650 in MS60 condition.

This is a coin that we frequently see uncertified or in raw condition that is regularly marketed on auction sites as being in uncirculated condition. Unfortunately, this is rarely, if ever truly the case. If you’re a serious collector and are looking for an uncirculated specimen, we highly recommend that you only purchase a certified coin.

Even then, stick with NGC or PCGS-certified coins and purchase them from a reputable coin dealer.

As you would expect, there are a relatively small number of 1934-s Peace dollars that have received an MS60 – MS63 grade. Our most recent census check reveals a total population of under 2,400. This is out of roughly 15,000 coins submitted for certification. Again, we’re only referring to NGC or PCGS coins, as they’re the most respected third-party grading companies in the industry. 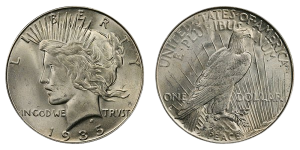 While we may have peaked value-wise on the 1934-s Peace silver dollar, the 1935-s Peace silver dollar is no slouch and has significant value as well. This is the fifth and final San Francisco-Minted coin to make our list. It is also the highest minted coin on our list, including all coins issued from 1927 – 1935, with a production of nearly 2 million coins (1.96 million to be exact).

With such a large mintage, you would expect for the value to be nominal, but as we’ve learned, San Francisco-issued coins weren’t known for having strong strikes and rarely grade out in uncirculated condition. Starting at $32 in fine condition, we see prices steadily rise as the condition improves, with a notable value of $210 in AU58 condition.

AU58 is the highest grade a coin can receive short of it being uncirculated. We then see a nice little bump in price to $295 in MS60 condition. Whereas many of the other featured coins are in the five-figure range in MS66 condition, this coin doesn’t reach this lofty level until it grades out in MS67 condition.

At the time of this writing, only 6 coins have been certified as MS67 by NGC and PCGS.

Taking a step back, we see that slightly over 4,200 coins have received an MS60 – MS63 grade, which considering the number of coins produced, isn’t much. This clearly is contributing to the significant value of this coin in uncirculated condition. With over 11,000 coins submitted at the time of this writing, just a bit over a third has received the coveted MS60 grade or above.

We hope you had just as much fun reading this article as we had writing it. We also hope we’ve helped you identify some potentially valuable coins that you previously viewed as common date coins.

We began our discussion with the 1924-s Peace dollar. This was the first of five “s” mint mark coins that made the list. This is in part because the San Francisco Mint was known for having weak strikes. The other “s” mint mark coins include 1927-s, 1928-s, 1934-s and 1935-s. The only Denver-minted coin to make the list was the 1927-d Peace dollar.

Be especially careful when purchasing raw or ungraded 1934-s Peace silver dollars. In our experience, marketers tend to over-grade and overhype these coins. Making a mistake on this coin could cost you hundreds or potentially thousands of dollars. We recommend that you only purchase an uncirculated specimen of this coin in certified condition or from a reliable coin dealer.

If you’ve already assembled a collection of this “six pack” of coins in uncirculated condition, you’re well on your way to completing a high-end Peace silver dollar collection, as there was only a total of 24 different Peace dollars produced. Once you acquire an uncirculated 1921-p and 1928-p Peace dollar, the remainder of your search should be easy sailing.

Not only are we a veteran dealer with years of experience in the industry, but we specialize in Morgan and Peace dollars, buying and selling thousands of these coins on an annual basis.

Give us a call today to see why we’re the premier coin dealer in Atlanta and beyond.

Tony Davis
PrevPrevious.999 Fine Silver Bars Offer Many Options to Investors of all Means
NextTips for Organizing Your Coin InventoryNext