Off time - no update .999 Fine Silver Bars Offer Many Options to Investors of all Means

.999 Fine Silver Bars Offer Many Options to Investors of all Means

Gold, and silver, and platinum, oh my! When it comes time to invest in precious metals, knowledge is power. Though we regularly deal in gold, silver, platinum, and palladium, we will begin with the most widely accessible of them all: silver.

The great thing about physical silver is that there are many different options and purities from which to choose, including a multitude of .999 fine silver bars and rounds. On the surface, it may appear as though your .999 fine silver options are limited, but you might be surprised.

The reason being is that there are many different sizes and manufacturers of silver bullion. In fact, you can choose from bars as small as a single gram or as large as 1,000 ounces!

The options and possibilities are endless, however, for our purposes, we’re going to limit our discussion to the most common and popular .999 fine silver that we buy and sell. We will also provide some insight and opinions on some of the most well-known silver manufacturers in the industry.

However, before we proceed, it’s helpful to take a step back and define what we mean by the term “.999 fine silver.” Silver can be refined to various levels of purity, but the most common and what is commonly referred to as pure silver is .999 fine. In most cases, it’s not necessary to refine silver any further, as only trace levels of base metals can be found in pure silver.

If you’re more familiar with gold, .999 fine silver has the same purity or is basically equivalent to 24k gold. While it’s possible to further refine precious metals, the time and expense in doing so typically isn’t worth it, as .999 fine is universally considered to be pure silver in the industry.

Now that we’ve established what we mean by .999 fine silver, let’s dig into some of the more commonly traded sizes of silver bullion in the industry, beginning with the most popular. 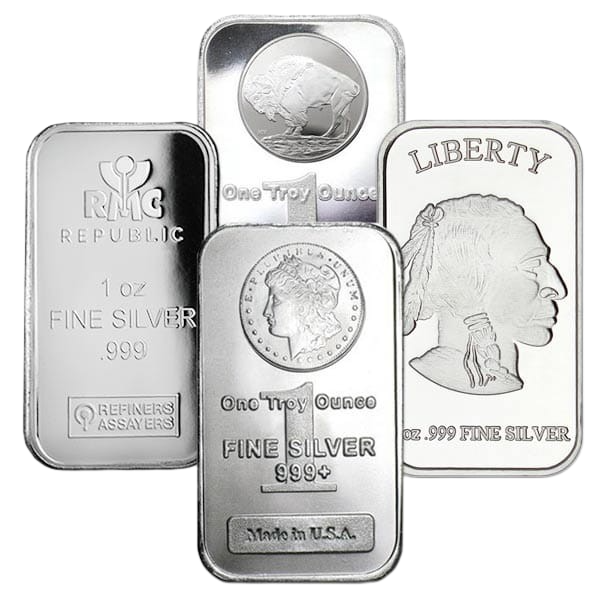 1 oz .999 fine silver rounds and bars are the most popular and most traded size silver bullion in the market today. This makes sense, as it’s relatively easy to track the value of these items, as the spot price of silver reflects the price of silver per ounce. In other words, no math is required to have a rough idea as to the value of your items.

Of the two, 1 oz silver rounds appear to be more popular and prevalent; although, there are plenty of good silver bar options as well.

Generally speaking, 1 oz silver rounds are typically sold in tubes consisting of 20 rounds per tube while silver bars are sold individually or in sheets. Most sheets consist of 10 or 20 bars, depending on the producer or supplier. 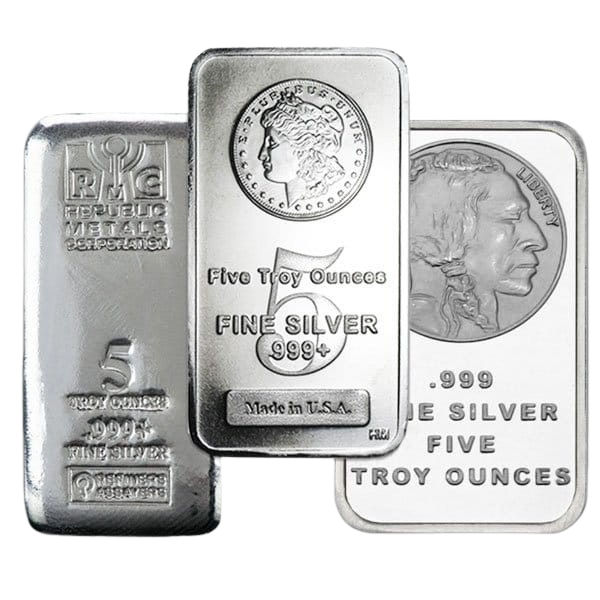 While 5 oz silver rounds exist, they’re not as common, so we’re going to limit our discussion of 5 oz options to 5 oz silver bars. Though the 5 oz silver bars aren’t as prevalent as some of the other bar sizes they are still great options and are within most folks’ budgets.

The reason the 5 oz bars aren’t as common as some of the other sizes could be that there aren’t as many manufacturers of these bars. Some of the more long-standing name-brand silver bullion refiners like Engelhard, Royal Canadian Mint or Johnson Matthey produced some 5 oz silver bars decades ago but did so in limited quantities.

Today, some of these bars are seen as collector items and can sell for substantial premiums. 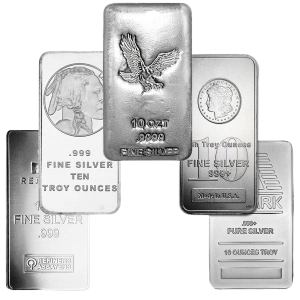 These bars are nice and compact and are great for stacking; especially if you have limited space in which to store your bullion. Additionally, nearly all producers of silver bullion offer 10 oz silver bars, so there are plenty of options available for investors. 10 oz silver bars are available either raw or sealed in plastic.

Most of the more recent bars come sealed in plastic from the manufacturer, while older ones are commonly available without packaging.

As a coin dealer, we love dealing in these bars, as they are frequently requested and highly liquid. There is strong demand for both generic and name-brand 10 oz silver bars, even though name-brand bars trade for slightly more, neither tend to sit on our shelves for long and both make for great investments. 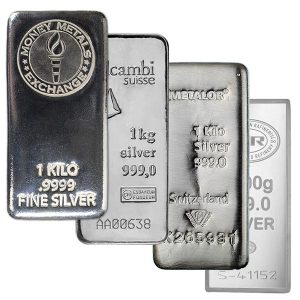 Kilo silver bars are popular among investors or collectors that are interested in accumulating a large quantity of silver bullion and would prefer to acquire a smaller number of items. As an example, 500 1 oz silver rounds or bars will take up a decent amount of space, whereas only 15.5 kilo silver bars will account for the same number of ounces.

For those individuals that aren’t as familiar with kilogram sizes, they consist of 1,000 grams or 32.15 troy ounces. In the U.S., we’re not accustomed to this weight, but it’s widely used throughout the rest of the world. In other words, a kilo silver bar is not an uncommon size.

A good way to view a kilo silver bar is that it’s roughly 1/3 the weight of a 100 oz silver bar. If you’re in the market for 100 oz silver bars and your coin dealer is out of stock, this is a great substitute.

Furthermore, if your goal is to eventually accumulate roughly 100 oz but would prefer not to have 100 pieces of silver bullion, this is a great way to chip away at your goal. 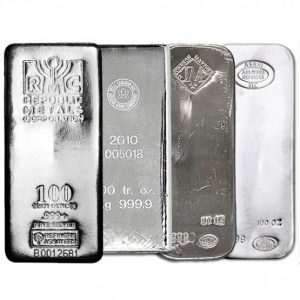 Oftentimes referred to as “bricks” due to their size and weight, 100 oz silver bars are for serious investors of silver bullion. Even though they are much larger than the previously mentioned options and trade at a fairly significant amount, they are still very popular among investors.

Most 100 oz silver bars don’t come sealed in plastic packaging and show evidence of wear and/or handling. In other words, they’re not as “pretty” as some of the other bars as one of our customers likes to say.

In fact, many were produced in previous decades when silver was only a few dollars an ounce, so in the past, they weren’t necessarily seen as serious investments and cared for as they are today.

Much like the 1 oz and 10 oz bars, we see quite a few different producers of these bars. Considering the larger size and value, it’s important to check the edges to make sure that they have a consistent finish, as counterfeiters have been known to hollow these bars out and fill them with tungsten.

Of course, this should be of limited concern if you’re dealing with a reputable silver bullion dealer. 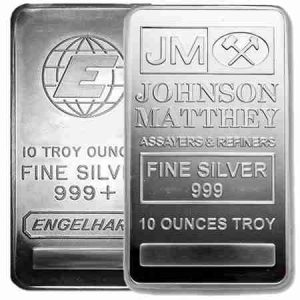 We briefly mentioned this above, but there are what are considered generic or standard producers of silver bullion and name-brand producers of .999 fine silver. Both are perfectly acceptable and contain the same purity of silver, it’s just that some are more recognizable, popular, and in demand than others.

There are countless silver bullion producers, so this isn’t meant to be disparaging to any other refiners, but there are typically three producers that rise to the top and are considered premium or name-brand refiners.

In no particular order, they are Engelhard, Johnson Matthey, and Royal Canadian Mint.

One reason why these producers are more popular is because of their longevity in the industry. They have all been producing silver bars for decades and have a reputation for producing quality products that are accurate with respect to their weight and purity.

Because these bars are well-known in the industry, they tend to trade at slightly higher rates than generic brands. Again, the purity is exactly the same as generic bars; it simply boils down to a comfort level with these particular refiners. 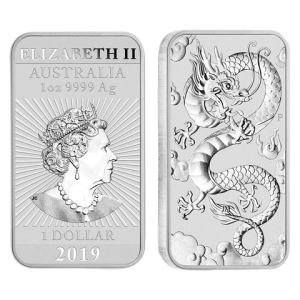 One of the main differences between government or sovereign-issued silver versus privately issued silver is that 99% of government-issued silver is in the form of coins, has a face value and is considered legal tender. In fact, this is the largest differentiating factor between the two.

However, just like anything else in life, there are exceptions. At the time of this writing, three government-issued mints produce silver bars. They include the Perth Mint from Australia, the Royal Mint in Great Britain, and the Royal Canadian Mint in Canada.

As you may recall from our previous discussion on name-brand producers, the Royal Canadian Mint made the list. The reason we didn’t feature the Perth Mint and Royal Mint is that they produce much less silver bullion.

Rather, their focus is on silver coins. Since they aren’t as prevalent or trade as frequently as some other producers, they didn’t quite make the cut.

That being said, if you ever have the opportunity to snag some silver bullion from the Perth Mint or Royal Mint, especially at generic bullion rates, we recommend you jump at the opportunity.

After all, generally speaking, government mints are the most trusted mints as it relates to the issuance of silver coins and bullion.

Hopefully, we have now provided you with a better understanding of the wide variety of .999 fine silver bullion sizes and shapes available in the market. Plus, for those who weren’t familiar with the term “.999 fine silver,” we’ve also defined and explained the purities to give you a better idea of what folks mean when referencing silver bullion types.

In terms of size options, we began our discussion with 1 oz silver bars and rounds. These are typically the most popular size as it provides potential buyers, even those with small budgets, the ability to invest in silver.

Folks interested in accumulating large amounts of silver tend to gravitate toward kilo and 100 oz silver bars, with 100 oz bars being the most popular of the two.

We then identified which manufacturers are name brand as well as which tend to be the most popular and trusted options. We then rounded out our discussion with a list of a few government-issued mints that produce silver bars.

Whether you’re in the market to buy or sell .999 silver bars and rounds, Atlanta Gold & Coin Buyers is your silver dealer of choice. We’re one of the leading bullion dealers in the industry and can help guide you toward an investment that makes the most sense for you and your goals.

Additionally, as a silver buyer, we pay among the highest rates in the industry. Give us a call today at 678-515-5763 to see why we’re the premier silver bullion dealer in Atlanta and beyond.

Tony Davis
PrevPreviousThe Best Silver Investment: How to Decide for You and Your Situation
Next6 Peace Silver Dollars That Can Be Both Common & Key Date CoinsNext