A Quick Look at 9 True Silver Dollars with US Presidents

A Quick Look at 9 True Silver Dollars with US Presidents

US Presidents have been featured on silver dollar coins for more than 120 years. Some of the coins are true silver dollars, in other words contain actual silver, while others are simply silver in color. If you happen to come across dollar coins featuring US Presidents, be alert. The coins may or may not have much silver content and below we will discuss who and what to look for when identifying if you have a silver dollar.

Knowing which coins contain a significant amount of silver takes some knowledge, even with the more familiar coins. Among rare US coins there are also some non-silver coins that are rare finds today as well.

Congress authorizes commemorative coins that celebrate and pay tribute to American people, places, events, and institutions. It is important to note that while these coins are legal tender, they are not minted for general circulation. To check out our article on similar US Gold Coins featuring presidents, you can read that article HERE.

We took the time to identify silver dollar coins featuring US Presidents and will address them in order of date from the earliest to the most recent.

First, consider the 1900 Lafayette Commemorative Silver Dollar. It might surprise you to learn that these 90 percent silver dollars were not minted in the year 1900 at all. In fact, they were produced the year before, in 1899, though they have no official date.

The “1900” refers to the statue of Lafayette featured on the reverse.

The complete inscription reads, “Erected by the Youth of the United States in Honor of Lafayette/Paris 1900.” Handily, this coin came out in time for the 1900 Paris Exposition, as was intended.

These silver dollars were the first $1 silver commemorative coins before 1983 and the first to feature President Washington. The obverse of the 1900 Lafayette Commemorative Silver Dollar showed side-by-side profiles of President George Washington and Lafayette. Lafayette was a Frenchman who brought aid to the US during the Revolutionary War.

You might also notice that the inscription reads “Lafayette Dollar.” This is significant because most US silver dollars are labeled as “One Dollar.”

The last year silver dollars containing silver content were produced for general circulation was in 1935. These coins are commonly referred to as Peace silver dollars. After that, the US Mint produced no dollar coins between 1935 and 1971. However, members of Congress decided they wanted to honor Dwight D. Eisenhower with silver dollar coins. Many of them opposed putting such a great man on a clad coin.

The coins minted for general circulation were copper-nickel clad and were devoid of silver. However, there were some 40% silver-clad Eisenhower coins minted between 1971 and 1976 by the San Francisco Mint.

You may wonder if your Eisenhower silver dollar coins actually contain silver. A good first step is to look at the mintmark, which identifies where the coin was produced. The only 40% silver Eisenhower dollars were minted in San Francisco and bear the “S” mintmark.

There are other features that you can attempt to identify when you sell these silver dollars. The edge of the dollar will provide a clue. If the center layer is brown, it is copper clad. If it is dark grey in color, or has the absence of a copper stripe, then it is most likely 40% silver. 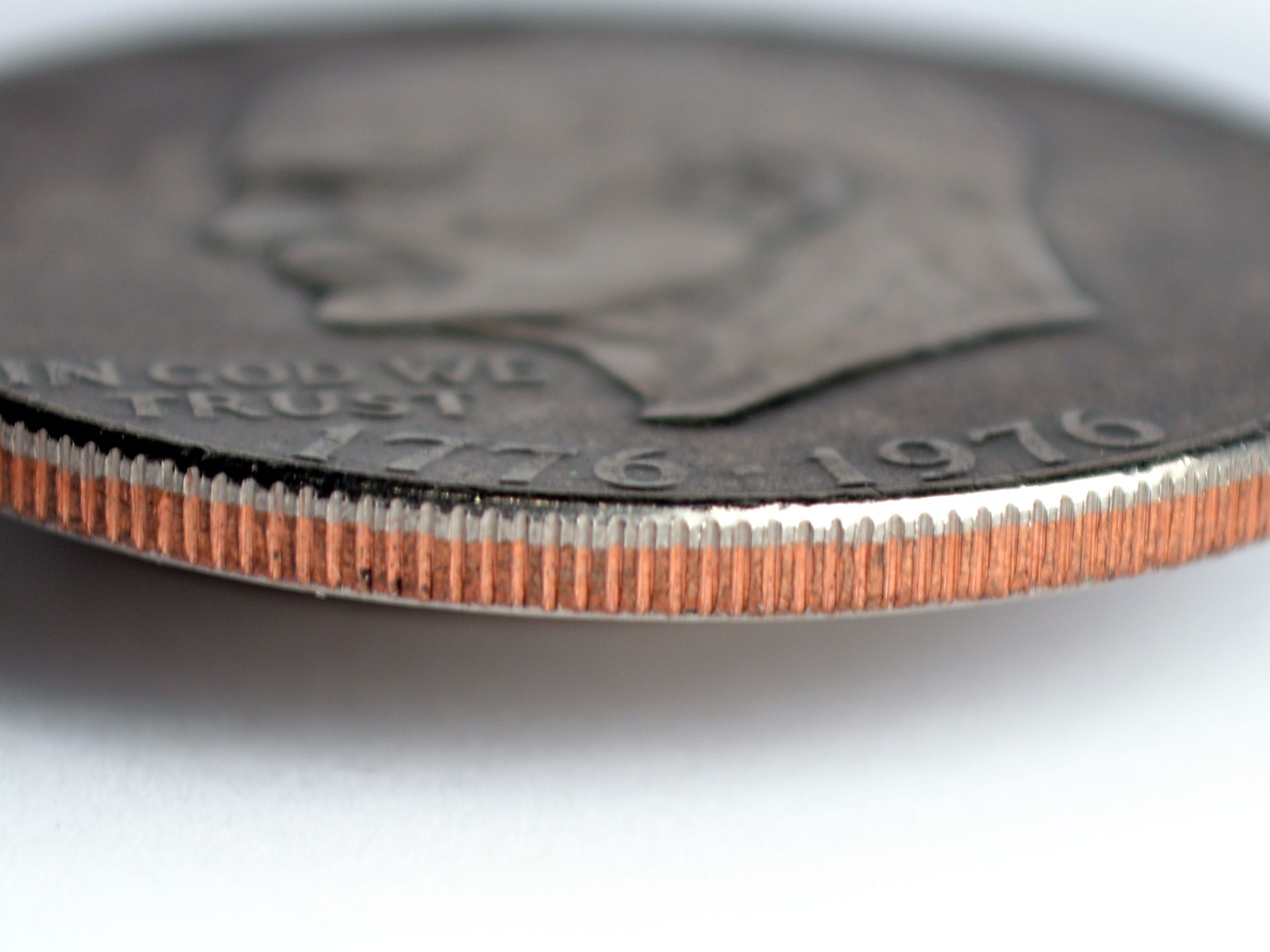 In 1990, The 90% pure silver Eisenhower Centennial Dollars were minted to commemorate the 100th anniversary of Eisenhower’s birth. The proof silver dollars came from the Philadelphia Mint and the uncirculated ones from the West Point Mint.

In fact, this coin was the first silver dollar coin with a “W” mintmark.

The obverse of the coin has John Mercanti’s “Janus Portrait,” with two images of Eisenhower overlapping. One image shows Eisenhower as the president, while the other one shows him as a 5-star general. The inscription reads, “Eisenhower Centennial.”

The reverse shows the Eisenhower home with the inscription “Eisenhower Home” below it.

Additional 90% silver commemorative coins produced by the United States Mint were the 1991 Mount Rushmore Silver Dollars. These coins were minted to recognize the 50th anniversary of the Mount Rushmore Monument.

The obverse features a view of Mount Rushmore, with its four presidents prominently displayed. Below Washington, Jefferson, Theodore Roosevelt, and Lincoln is a laurel wreath. Inscriptions include “Golden Anniversary” and “Mount Rushmore National Memorial.” On the reverse, an Eagle Crest is shown over a map of the US.

The 1993 Bill of Rights dollar coins are a great addition to any commemorative silver dollar collection. This .90 fine silver coin features President James Madison’s image and name on the obverse. Also on the front or the obverse of the coin are the inscriptions “Liberty” and “In God We Trust.”

The reverse shows the image and name of Madison’s Virginia home, Montpelier.

Interestingly, this dollar coin is labeled the Bill of Rights dollar. Yet, the design shows nothing that recognizes the document or the date of its signing. 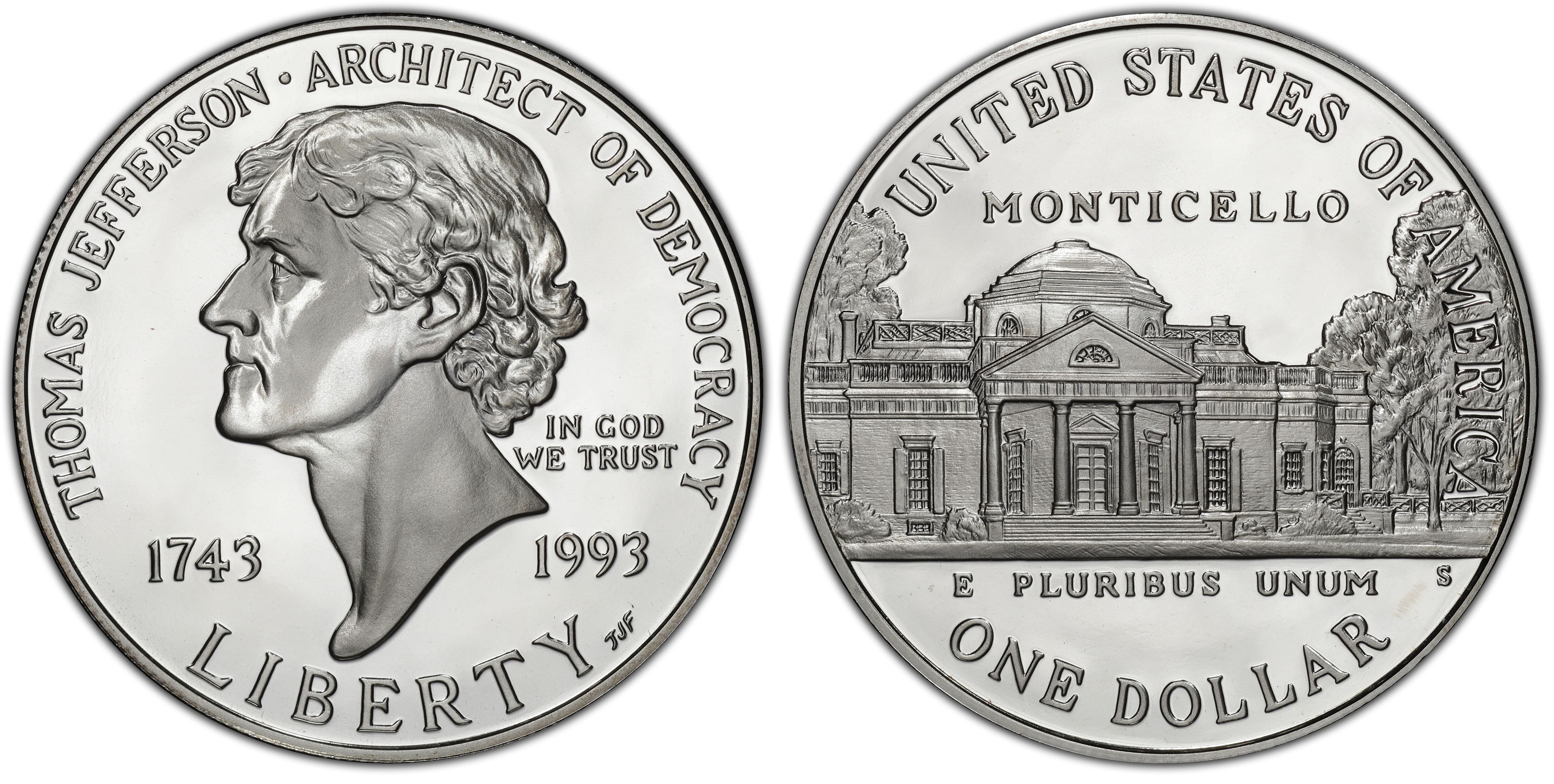 The 1993 Jefferson commemorative silver dollars were minted in San Francisco to honor the 250tth anniversary of President Jefferson’s birth. The obverse of these 90% silver coins shows a side profile of Thomas Jefferson. Also on the front are the inscriptions “Thomas Jefferson” and “Architect of Democracy.”

The 2009 Abraham Lincoln commemorative silver dollars are also 90% silver. Their obverse shows an image of President Lincoln, which was based on the statue at the Lincoln Memorial. The reverse shows the last 43 words of Lincoln’s Gettysburg Address.

To the right, an image of Lincoln’s signature graces the coin. 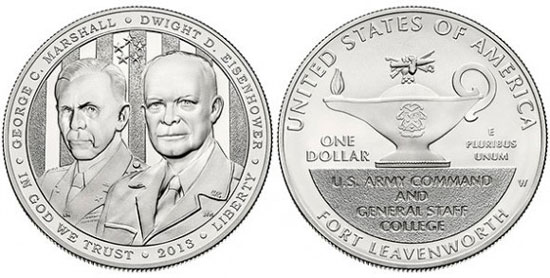 When the US government decided to honor 5-star generals, of course, President Dwight Eisenhower was included. His profile, alongside that of George C. Marshall, appears on the obverse of this 90% silver coin. The background shows stripes and a 5-star insignia, and around the coin are  the names of these two generals. 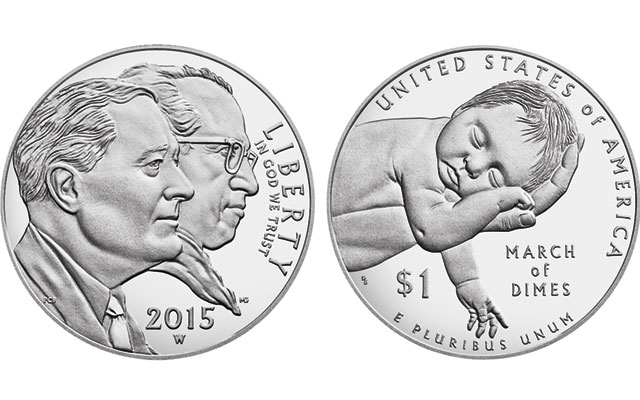 The 2015 March of Dimes Commemorative Silver Dollars bore the likeness of President Franklin Delano Roosevelt. This was fitting, as Roosevelt founded the National Foundation for Infantile Paralysis, which we now know as March of Dimes.

The obverse of the coin shows a profile of Roosevelt and Jonas Salk, both of whom were instrumental in overcoming polio. The reverse depicts a baby held in a parent’s hand. Below it, read the inscription “March of Dimes.”

These 90% pure silver coins were minted in Philadelphia and West Point.

Other Silver Dollar Coins Past and Present

The US Mint has minted many silver coins. The coins include the first silver dollar coins in 1794. Also, consider the coins produced by the Carson City Mint, which was established as a result of the Comstock Lode discovered in Nevada in 1859. These are some of the most popular Morgan silver dollars.

Designed by George T. Morgan, the Morgan dollar was a 90% fine silver coin, though it did not bear the likeness of a president.

Likewise, the Peace Dollar was minted from 1921 – 1935 to celebrate the peace following World War I. As is the case with Morgan dollars, these coins feature an image of Lady Liberty as opposed to a president. Even the American Silver Eagle had a depiction of Liberty. However, these coins all have high silver content, and many are highly collectible.

At Atlanta Gold and Coin Buyers, you can buy or sell Silver Dollars. Not only do we buy and sell coins with presidents, but we also offer other silver dollars, such as the Morgan & Peace Dollar, and the American Silver Eagle, to name a few. Our prices are among the most reasonable in the industry.

What is more, we offer concierge type service, transparent pricing, and expert precious metals advice. Contact us today to learn how we can help you with coin and bullion advice, coin appraisals, or coin purchases.