Off time - no update Certified Coins: When to Submit Your Coins to NGC & PCGS

Is the Cost of Coin Grading from NGC & PCGS Worth the Expense?

Is the Cost of Coin Grading from NGC & PCGS Worth the Expense? 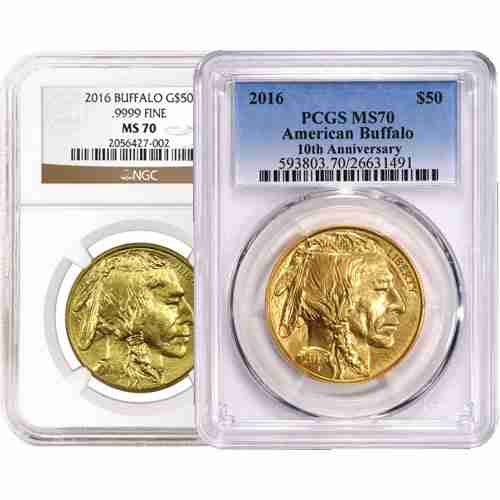 To submit, or not to submit. That is the question. We recently received a phone call from a gentleman who had inherited a large and diverse coin collection from his grandfather. During the conversation, he informed us that his plan was to submit the entire collection to NGC or PCGS to have the coins certified and graded. He mentioned that he had spent a considerable amount of time researching the coins and saw some substantial price differences between certified coins versus raw or ungraded coins.

While in some instances this can be the case, oftentimes the additional benefit derived from having a coin professionally graded or certified doesn’t offset the time and expense in doing so.

As a coin dealer who purchases hundreds of thousands of coins each year and submits less than 1% of those to be certified, we feel qualified to comment as to when it’s worth substantial enough value to have your coins certified.

Keep reading to learn more about the different types of coins we frequently see in coin collections and which coins you should consider submitting to NGC or PCGS to have certified.

Most coins that we evaluate as part of an estate coin collection are typically common date coins. This means that there was a significant quantity of coins produced in that particular year making them less rare yet more affordable.

There’s not a hard and fast number as to what qualifies as a common date coin, but in most cases, coins produced in quantities of over 1 million tend to trade as common or standard coins.

While common date coins imply that the coins have limited value, this isn’t always the case. In fact, some of these common date coins can have significant value; especially if they’ve since become obsolete coins meaning they are no longer used in general circulation or if they’re older silver dollars (i.e. minted prior to 1873).

However, it’s typically not worth the expense to have common date coins graded and certified by PCGS or NGC; especially if they’re in average condition. Common date coins in high-end condition, on the other hand, may be a different story.

Coins that are common date, but in uncirculated condition should be evaluated and considered for certification purposes. Most uncirculated coins that we see are those that were more recently issued, such as Lincoln memorial cents, Jefferson nickels, Roosevelt dimes, Washington quarters, Kennedy half dollars and modern issued silver dollars.

In other words, these are coins that are currently being used in general circulation.

In most cases, the potential benefit of having these coins certified doesn’t outweigh the expense. However, uncirculated coins that were minted prior to the coins that circulate today, such as Indian Head pennies, Buffalo nickels, Mercury dimes, Standing Liberty quarters, Franklin half dollars and Walking Liberty halves, may potentially see enough increase in value to warrant having the coins certified.

The same holds true with “type coins.” There are various definitions associated with type coins, but for our purposes, we’re going to focus on coins minted in 1916 and earlier.

As we mentioned earlier, type coins are older U.S. coins that we don’t frequently see in circulation, such as those produced prior to 1916. As expected, most of the type coins we see in estate coin collections are common date coins in average condition. This is most likely because coin collecting became a popular hobby in the early 20th century and it was common for collectors to pull coins from circulation at that time, place them in coin albums, and attempt to assemble a complete collection.

For example, Indian Head penny albums tend to be a common staple in most estate coin collections that we see these days.

Since most type coins are common date coins, they typically don’t have significant value, and in most cases, aren’t worth the expense of having them certified.

However, the same doesn’t hold true if they’re in higher-end condition. In most cases, type coins in AU (Almost Uncirculated) condition or better are a more likely candidate for certification, although, that’s not always the case.

Other type coins that may be NGC or PCGS certification candidates include older coins, such as those produced in the mid-1800’s or earlier, obsolete coinage, and/or silver dollars produced prior to 1873. Depending on the year and condition, they may benefit from being professionally graded. Even though some of these coins aren’t necessarily rare, at least according to their original mintage numbers, many were melted down in 1918 in response to the passage of the Pittman Act and can be somewhat scarce. Furthermore, many were heavily circulated and lack the fine details of a quality coin.

All rare, low mintage or key date coins (typically those that have mintages of under a million coins) should be evaluated on an individual basis to determine if they qualify for submission to a third-party grading service (TPGS) such as NGC or PCGS. Some extremely low mintage key date coins, such as those with production runs of under 100,000, can benefit from being certified, even if they’re in circulated condition.

Additionally, coins that are commonly counterfeited, such as 1856 Flying Eagle cents, 1943 copper pennies, 1877 Indian Head pennies or three-legged buffalo nickels, just to name a few, will become more marketable when certified. These coins can be difficult to find in any condition and are in high demand by collectors who are interested in completing their sets.

In nearly all situations, key date coins in uncirculated condition are worth having professionally graded. This is especially the case if you have multiple coins to submit, as this will help reduce your overall expense per coin when factoring in shipping and insurance expenses. Professionally graded key date coins also remove subjectivity with respect to the grade of the coin as well as confirm authenticity. And in some cases, a grade or two variant can translate into a substantial difference in the value of your coins. Check out this article that highlights several coins that are significantly more valuable with just a grade or two difference.

If you’ve studied the guidelines in this article and believe that you have potential candidates to submit to NGC or PCGS, we recommend you first inspect the coins to determine if they’ve been altered or have evidence of damage such as spots, toning, or excessive wear and tear. We also wrote an article a few years ago listing factors that affect the value of silver dollars, which can apply to just about any coin.

However, other issues not specifically addressed in previous articles include environmental damage from improperly

stored coins, PVC damage, which is caused by a chemical breakdown in the plastic coin holder, and damage from coins being used as jewelry, such as edge scratches and dents from prongs.  We recommend that you closely inspect your coins (both front and back) with a triplet loupe to determine if they exhibit any of the issues noted above or from our previously mentioned article. Our personal favorite loupe is a Belomo triplet 10x magnifier, but there are plenty of good options similar in the marketplace.

Coins that have damage or have been altered may not be suitable for grading, which means you’ll pay a grading fee to submit the coin, but the coin won’t be encapsulated by NGC or PCGS. Others may be encapsulated but won’t receive a straight grade. In other words, the coin won’t receive a letter and number grade, but rather a detail grade or qualifier. For example, an almost uncirculated (AU) coin without issues may receive a grade such as “AU55” whereas a cleaned coin that otherwise is in AU condition may receive an “AU Details” grade. Detail grades can reduce the value of a coin by a couple of letter grades, if not more.

At the end of the day, you’re looking to receive a positive return on investment (ROI) when considering whether or not you should submit your coins. The cost of grading, shipping, insurance, the turnaround time, and the chance that your coin won’t grade out as expected should all be factored into your decision.

Additionally, if you’re not a member of NGC or PCGS, you’ll need to sign up for a paid membership or find an authorized coin dealer that will submit the coin(s) on your behalf. Note that most coin dealers have shied away from submitting coins on behalf of customers due to liability reasons, so it may be difficult to find a dealer that offers this service.

Considering the various fees and expenses, in most cases, the value of your professionally graded coin will need to increase by $50 or more just to break even. This is why we only submit a small fraction of the coins that we purchase for third-party grading.

We share all this information not to dissuade you from having your coins certified, but to inform you of the factors that should be taken into consideration before submitting your coins for third-party certification.

As a reminder, here are some questions to ask yourself when evaluating the coins in your collection. Do you have common date average condition coins? If so, these coins typically aren’t worth submitting.

What about type coins? Remember, type coins are most commonly associated with coins produced in 1916 and earlier and aren’t seen in circulation much, if at all. If you have one in uncirculated condition, or if they meet the criteria that we discussed above, they may be worth submitting.  Rare or key date coins should always be evaluated for possible submission, especially if in uncirculated condition.

Additionally, be sure to inspect your coins for any evidence of damage or alteration. Third-party grading companies may not certify these coins depending on the extent of the damage.  Even if they do, they’ll be assessed with a detail grade along with a qualifier.

Finally, run a cost benefit analysis to determine if the additional benefit of having a coin certified will outweigh the cost. The breakeven point is typically $50 or more, so be cognizant of all these expenses prior to making your decision.

The coin experts at Atlanta Gold & Coin Buyers are well-qualified to determine if any of your coins are suitable for third-party certification and are available to answer any questions that you might have with respect to buying or selling certified coins.

Give us a call today at 404-236-9744 to receive expert advice and unparalleled customer service. We look forward to hearing from you and earning your business.