Coin collectors love to hear stories of coin hoards. Usually, someone has hidden away coins for many years without telling anyone. Often, the coins are silver dollars. In fact, Morgan dollars have been included in some of the most well-known coin hoards.

Coin hoards offer the person who acquires them an easy road to riches. However, you need to use smart investment strategies when selling coin collections. Some coin hoards have been handled well, though, and actually increased the value of the coins. Read on to learn about some of the most famous coin hoards and how they impacted the value of Morgan silver dollars.

Lincoln Fitzgerald had early connections to illegal gambling and eventually built a legal casino himself. Fitzgerald’s Casino in Reno welcomed visitors from around the world as Fitzgerald himself prospered. Throughout all this time, however, the man was setting aside coins. In fact, in 2003, long after the casino owner’s death, over 100,000 Peace and Morgan dollars were found in bags inside the building.

Many coin enthusiasts enjoy collecting coins from a collection such as Fitzgerald’s. Although his collection included 120 different date, mintmark, and VAM combinations, there were only between one and five specimens of each for most of these variations in the collection. That makes completing a collection of Morgan dollars from the Fitzgerald Collection a challenge that many coin collectors can’t resist.

Harry W. Bass had a gift for making money. Yet, he also came to enjoy not just having and making money but also studying money. He became interested in numismatics after helping his friend acquire some low-mintage quarters from 1955. Bass got the coins easily, at face value, and went on with his life.

However, the friend returned ten years later, telling Bass that the coins were now valued at ten times the face value. Bass was intrigued, and a new coin collector was born.

Bass primarily collected gold coins, but he had many different coin collections. One of them was a collection of silver coins, including some high-quality Morgan dollars. Bass’s positions with the American Numismatic Society and business connections increased public knowledge of his hoard. His best and most unique coins became a part of the permanent collection at the Harry W. Bass, Jr. Foundation, while other coins were auctioned off in May 2000, increasing the value of these coins with each higher bid.

While the Bass hoard is more accurately termed a collection, what happened in Montana conveyed the true meaning of the word “hoard.” Imagine how George Bouvier, a simple shop owner in Deer Lodge, Montana, slowly built up a hoard of 8,000 silver dollars. He didn’t like banks, so he hid away the coins in the walls of his house, in coffeepots, and under the floorboards of his shop. Eventually, nearing his death, Bouvier told a friend about his hoard.

The family found out, and a search began, ultimately revealing over 17,000 coins. 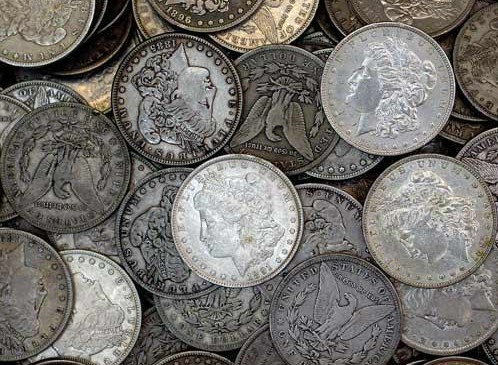 The story alone is enough to spark interest in the Great Montana Hoard. Beyond that, the condition and variations of coins in the hoard appeal to coin collectors. And, with the fascinating tale behind the coins, these Morgan dollars typically have a higher value.

In rural Pennsylvania, another stash of Morgan silver dollars was discovered in an Amish country house. In all, over 8,000 Morgan dollars were found there. Named the Lincoln Highway Hoard because the home was so close to that road, this coin hoard was a surprising find. Thus, the introduction of these coins to the marketplace brought interest and higher prices for the Morgans.

At a motel in 1952, Samuel Teich dropped an Indian Head Penny while checking in. The motel owner immediately picked it up and proceeded to show the Teich family his own coin collection. Teich was fascinated and began collecting coins. Teich sought to buy the best of each type of coin he collected, often buying proof coins or unique specimens.

He placed the coins in envelopes, and no one touched them for almost 50 years.

The Teich family understood the do’s and don’ts of selling coin collections. When these coins were auctioned in 2011, coin buyers clamored to get a look at and possibly purchase some of this unusual collection.

The Battle Creek Hoard included 10,000 Morgan silver dollars held in ten bags tagged from the Philadelphia Mint and dated in the 1880s, along with 1920 tags from the Chicago Federal Reserve. After the owner’s death, the bags of coins were offered to coin dealers. Many of the coins were in phenomenal condition, and among them were some rare silver dollar coins. Many of these coins have the special star designation of exceptional eye appeal.

Eventually, the coins were discovered and sold to a numismatic company. Although these coins don’t have great eye appeal, the hoard included thousands of Morgan dollars. Now, with rarer coins locked away in private collections, gathering a set of coins from this hoard has become extremely difficult, adding to their value.

The Redfield Coin Collection started as a hoard of hundreds of thousands of silver dollars. During the Great Depression, LaVere Redfield built a fortune by dealing in real estate and securities. He then went to Reno, where his distrust of banks prompted him to buy bags of silver dollars and store them in his truck, cellar, and behind a false wall in his home. When the coins were discovered, there were over 400,000 silver dollars.

Flooding the market with this many silver Morgan dollars, many of them high-quality coins, could have depressed the price of Morgan dollars significantly. However, to avoid that, Steve Markoff, who purchased all the coins, released them slowly over several years.

Over the years, millions of Morgan silver dollars have been hoarded, but on the other hand, millions have also been melted in response to the Pittman Act. This resulted in hundreds of million of coins being melted down into silver bullion. The Sherman Silver Purchase Act was also instrumental in affecting the number of silver dollars in circulation. The passage of these bills has historical significance with respect to the survival rate or the number of silver dollars remaining. One thing is for certain; we’re sure to be introduced to new and exciting Morgan silver dollar coin hoards as time passes.

Where to Buy and Sell Morgan Silver Dollars

Interest in Morgan silver dollars is extremely high right now. Whether you want to sell Morgan dollars or buy silver dollars for your own collection, there has never been a better time. At Atlanta Gold & Coin Buyers, our prices are among the most reasonable in the business. We provide accurate appraisals and transparent pricing so that you know exactly why we offer the prices we do.