Sell Us Your Old and Rare Coins

Atlanta Gold and Coin Buyers offers among the highest rates in the industry for old, rare, and collectible coins, also known as numismatic coins. We see our customers by appointment, allowing us to give you our undivided attention in a secure and private setting.

Do You Want to Sell Your Rare Coins?

We want to build long-term relationships with our customers. That’s why we offer some of the highest rates in the Atlanta metro area for not only rare coins, but also for gold coins, silver coins, foreign coins, and more. Here are some examples of the old and rare US coins we buy and sell.

Half cents first appeared in 1794 and were a necessary coin to facilitate business in the past. They became obsolete in 1857 due to an increase in both prices and wages.

Large cents are composed of copper, and the copper content was worth approximately one cent back in the day. They were first minted and circulated in 1793 and then subsequently minted every year until 1857, with the exception of 1815. Types of large cents include:

After large cents were discontinued in 1857, they were replaced by a smaller coin that was initially composed of copper and nickel. We usually see small cents with the “Flying Eagle” and “Indian Head” designs.

This is an odd denomination that was first minted in 1864, but it was discontinued only 10 years later. The two cent coin is also the first coin to have the phrase, “In God We Trust” inscribed in its design.

Dimes first appeared in 1796. There are six major types of US dimes: 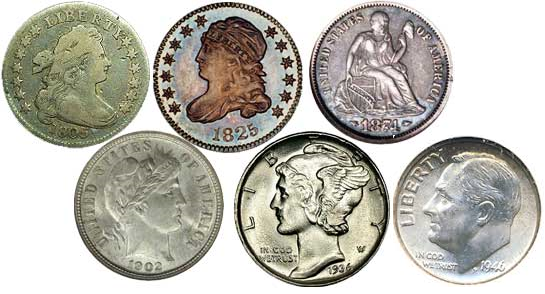 20 cent pieces were only produced from 1875 to 1878. The reason? It was easy to confuse a quarter with a 20 cent piece, as the 20 cent piece is only slightly smaller than the quarter, and they both feature the same “Seated Liberty” design.

The first quarter dollars appeared in 1796 and are still in circulation today. Quarter dollars were traditionally made of silver until 1964. Major types/designs include: 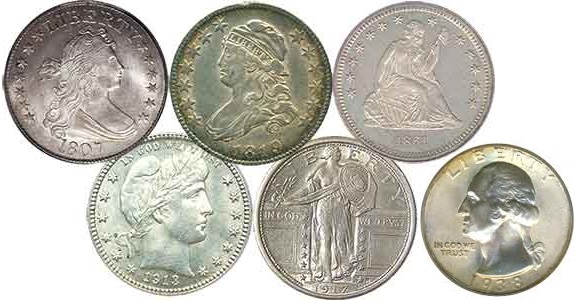 In 1794, the first half dollars were minted in the US. It was a popular denomination in the past and was often used in large transactions. Today, it has been surpassed by the quarter in terms of mintage and usage. Nevertheless, half dollars remain as a favorite in the world of numismatics. There are eight major types of half dollars:

The first silver dollars were minted in 1794. It was a key currency denomination as the coins minted prior to the dollar were smaller coins valued at only a fraction of its value. Silver was discontinued in the mintage of dollars in 1935, with the exception of commemorative and American silver eagle coins. Major types of silver dollars include:

Shown here are the Morgan and Peace Silver Dollars

Are you interested in learning more about rare coins and which of your old coins may be highly valued? If so, contact us today for a free, no-obligation appointment. In addition to coins, we also buy and sell gold, silver, and platinum bars and bullion. 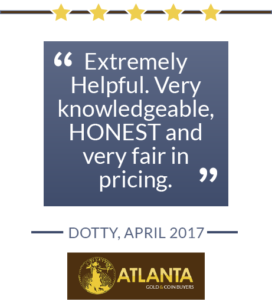