Who Are the Figures on Obsolete Banknotes? 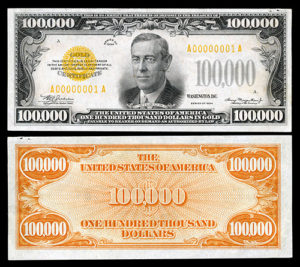 Civilizations have historically recognized the great men and women of their time by commemorating them on currency that rare coin dealers prize. In the United States, 53 individuals have been depicted on our banknotes. Today, even many collectors of rare coins and banknotes are unfamiliar with some of the figures on the earliest U.S. banknotes that were circulated as legal tender.

Salmon Portland Chase appeared on the 1862 $1 legal tender, as well as $10,000 bills that were printed until 1945. Chase was an outspoken abolitionist who served as Secretary of Treasury under Abraham Lincoln before becoming Chief Justice of the U.S. He is responsible for introducing paper currency to the United States, and he put his face on many of the bills—including the first $1 bill—to increase his popularity.

Albert Gallatin can be found on the 1862 $500 bill. Gallatin moved to the United States from Geneva in his 20s. After serving in the government for many years, he was appointed Secretary of Treasury by Thomas Jefferson. He held this position longer than anyone else in American history. Later he would serve as ambassador to both France and Great Britain. Before his death, he helped found New York University.

Robert Morris is considered to be, along with Albert Gallatin, one of the founders of the American financial system. He was responsible for managing the early United States economy, and his writings on the subject were the basis for Alexander Hamilton’s work as Secretary of Treasury. His economic prowess earned him a spot on the first $1,000 bill in 1862. Ironically, he spent much of his later life in debtors’ prison due to a bad land investment.

As our 28th president, Woodrow Wilson was well known for guiding the nation through World War I, establishing equal rights to vote for women, and creating progressive legislation like the Federal Reserve Act. Possibly due to the latter, his image was emblazoned on the $100,000 bill that was printed in 1934-35 but was never publicly circulated. This note was used as a gold certificate for transactions between Federal Reserve Banks. The government owns the few specimens that exist today.

Many rare coin dealers prize these banknotes for not only their rarity but also their unique place in the landscape of American history.