Four Common Issues That Affect the Value of Silver Dollars

Four Common Issues That Affect the Value of Silver Dollars

Silver dollars are some of the most popular silver coins bought, sold, and traded in the U.S. today. The intrigue of these coins is due to a few factors, including the age, the coin’s history, the rarity, and the significance of the designs.

Because these coins are condition sensitive, pristine examples of these coins can sell at a significant premium over the silver value of the coins. On the other hand, when the coins are in less than stellar condition, you should expect to receive less when you sell your silver dollars.

It is important to note that only certain US coins contain silver. The table below outlines which coins were struck at the United States Mint containing silver. Pay attention to the silver content, date, and mintmark, as well as, the specific silver dollar coins.

There are $1 coins that many people believe are valuable silver dollars such as the Susan B Anthony Dollar which contains 0% silver or the Eisenhower Dollar which only contained silver if it was produced by the San Francisco Mint.

We are not going to address these coins, but rather will focus our attention on Morgan silver dollars and Peace silver dollars, as they are the most popular and commonly traded 90% silver dollars in the market today.

In this article, we’ll highlight some of the most common issues that we see with silver dollars and how the various issues affect the price of silver dollars. We’ll address each of the issues in ascending order, from least important to most important.

The field of a silver dollar is the blank space between the design or image on the coin and the edge of the coin. This is typically one of the best places to have an issue and has less of an impact on the value of your coin than the other issues we’ll describe below.  It’s common for coins to have bag marks in the field, even with uncirculated silver dollars.

In fact, it’s nearly impossible to find an example of a Morgan or Peace silver dollar without field issues, except if you happen to have a proof Morgan silver dollar in your possession, as these coins weren’t produced for general circulation.

While it’s preferable to have issues on the reverse side of the coin as opposed to the obverse, or front of the coin, minor issues have relatively little impact on the price of your silver dollars. 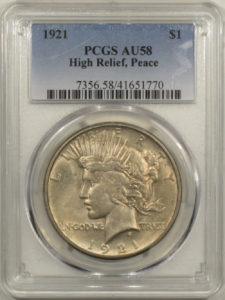 All coins, no matter when they were minted have high points that are more susceptible to damage and wear than other parts of the coin. With respect to silver dollars, the cheek and hairlines of Lady Liberty on the obverse side of the coin and the eagle’s wings and breast feathers on the reverse side of the coin tend to exhibit the most issues.

Those coins with greater wear and more evident issues, especially on the cheek and hairlines of Lady Liberty, tend to be in less demand than coins with merely field issues. In fact, wear to the high points of a coin can make the difference between an uncirculated and circulated condition coin.

The aesthetic look, or condition of a coin, is also a contributing factor toward its value. Even if the coin is otherwise in good condition, heavy marks or scratches on the high points can significantly reduce the appeal and value of your coins. 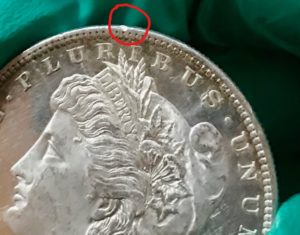 Generally speaking, the rim or edge of a silver dollar is less important than the high points and field. However, rims that have significant issues, such as heavy dents, nicks, and gouges are in less demand than silver dollars with the aforementioned issues. Rim issues can result from general circulation, dropping the coin, a mint error, or intentional defacing of the coin.

If you happen to have a mint error that includes perceived damage to the rim, such as a clipped rim, you may have a rarity on your hands as opposed to a damaged coin. However, most rim issues that we see are a result of mishandling the coin.

That being said, if you have a legitimate error coin in your possession, consider having it evaluated by a coin dealer or potentially submitting it to a third-party grading service to have it certified.

Even though it’s counterintuitive, you should never clean a coin, as it can significantly reduce its value. Even coins that have substantial dirt, tarnishing, or toning should be kept in their original condition. The cleaning of coins is frowned upon in the industry; so much so that some third-party professional grading services (TPGS) will not grade a coin that has been cleaned, as they consider the coin to be altered. 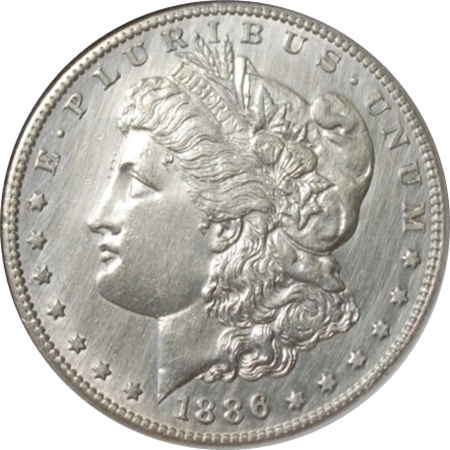 Other TPGS will grade the coin, but will only do so with a qualifier, that may state that the coin has been cleaned, altered, or “whizzed.” A whizzed coin is a coin that has been buffed or polished with a mechanical brush.

Whizzing a coin may give the coin a brilliant-like appearance, but anyone that purchases or deals in coins will be able to see that the coin’s luster has been altered. With coins that have been whizzed, you’ll notice medium to large circular scratches on the surface of said coin.

The intent of altering the coins is to try and increase their value. This can give the perception that coins in circulated grades are in better condition than is actually the case.

Silver dollars are worth more if they’re perceived to be in high-end condition, which is one reason why you might want to purchase a coin graded by a reputable service, especially if a rare or key date coin. Remember that a coin is worth substantially less if it’s been altered.

Among all of the issues described above, cleaned or altered coins will reduce the overall value of your silver dollars the most.

We’ve described a few common issues with silver dollars that can significantly affect the value of your coins. The least important issue involves minor issues to the field of the coin, followed by issues to the high points of the coin.

Next are issues with the rim or edge of the coin, and last but not least, are issues arising from cleaning or polishing the coins. Whether you’re interested in buying or selling silver dollars, it’s important to know the major factors that affect the value of silver dollars before you do so.

Whether buying or selling silver coins to Atlanta Gold & Coin Buyers, you can be sure that we will carefully evaluate your silver dollars for all of the above issues that we identified and will offer competitive rates based on these factors.

With our team of reliable coin experts, you can rest assured that we will treat you fairly. You will be clear about whether you want to sell the coin for its numismatic value, keep it in your coin collection, or sell it for its melt value.

What’s more, our transparent coin-buying rates for silver are among the best in the industry. Contact us today to find out more about how to maximize the value for your silver coins.