Your Guide to the U.S. Mint Olympic Commemorative Coins

by Sophie Kirk
Comments are off

Over the years, the United States Mint has issued a number of special coins commemorating different events in American history. Between the years of 1983 and 2002, much to the delight of rare coin collectors, the Mint issued a series of coins to celebrate the Olympic Games, Special Olympics, and Paralympics.

What Are Olympic Commemorative Coins? 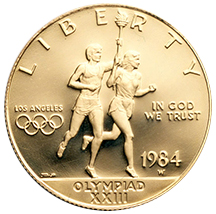 The commemorative Olympic coins were minted as half dollars, silver dollars, and gold coins in amounts of $5 and $10, offered in uncirculated and proof finishes. The first coin was minted in 1983 for the 1984 Los Angeles Olympics, becoming the first commemorative silver dollar issued by the mint in over 80 years, followed by a $10 gold coin commemorating the same event.

Compared to the 1984 and 1996 Olympics, the 1992 Olympics was barely a blip on the radar from a coin perspective. However, the U.S. Mint produced silver dollars and half dollars in 1992. The silver dollar is likely of special significance to most baseball fans, as it depicts an image of Nolen Ryan. Ryan is a Hall of Famer and is considered to be one of the most intimidating pitchers of all time.

As local rare coin dealers and rare coin collectors know, a series of coins were issued to commemorate the 1996 Atlanta games between 1995 and 1996. These coins featured designs highlighting several Olympic events, including half dollars representing basketball, baseball, swimming, and soccer, and dollar coins representing gymnastics, track and field, cycling, tennis, rowing, and high jump. Additionally, a series of $5 gold coins were also produced.

Are My Olympic Commemorative Coins Valuable?

The question at the forefront of the minds of rare coin collectors is whether or not these coins have any value. The answer, of course, is that it depends on the coin, its rarity, and condition. Most of the coins trade for their bullion value, which at the time of this writing is $12 for silver dollars, $300 for $5 gold coins and $600 for $10 gold coins; although, there are exceptions, as we’ll discuss in further detail below.

Historically speaking, the price of proof and uncirculated commemorative half dollars, silver dollars, and $5 gold coins have been on par with one another. However, the mintage of several uncirculated Olympic commemorative coins was substantially less, resulting in higher prices. Of particular note, the uncirculated 1996 Soccer and Swimming commemorative half dollars, the 1996 Cycling, Wheelchair, Tennis, Rowing, and High Jump silver dollars and all of the $5 uncirculated Olympic gold coins sell for more than their counterparts; substantially, in some cases. Our Buying and Selling Guide and price chart offer more details on pricing.

If you have Olympic commemorative coins or other rare coins to sell, contact Atlanta Gold & Coin Buyers at 404-236-9744 to schedule an appraisal, or contact us to have your items appraised by mail.