A faithful reader of our blog posts recently brought to our attention that fake Morgan silver dollars have made their way to online auction sites.  Oftentimes the fake coins aren’t detected until after the buyer protection policy rights have lapsed, which means you could potentially end up with a near worthless coin on which you spent hundreds, if not thousands of dollars. These helpful hints will help you to quickly identify if you’re in possession of one of these coins, so that you will receive protection under the buyer protection afforded under most online auction sites.

In addition to the weight, the diameter and thickness of the Morgan silver dollar can be measured to ensure it’s authenticity.  The diameter and thickness of an uncirculated silver dollar should be 38.1 mm and 2.4mm, respectively. A caliper is the ideal tool to use to measure the height and the width of the Morgan silver dollar.  Slight variances are typically within the margin of error for these coins, but any substantial differences should be reason for concern.

Another factor to consider is that the metal content of most fake Morgan silver dollars differs from the 90/10 silver/copper composition of authentic Morgan silver dollars.  An easy way to detect if your coins is fake is to check to see if it’s magnetic.  Precious metals, such as gold, silver, platinum and palladium aren’t magnetic, so if your coin is attracted to a strong magnet, such as an earth magnet, then you can be sure that it’s fake.

Lastly, highly skilled counterfeiters have been known to add a “mint mark” to a coin or remove a mint mark in an attempt to increase the value of the coin.  The mint mark indicates where the coin was minted.  The five mints that produced Morgan silver dollars from 1878 – 1921 are the Denver (D) mint, the San Francisco (S) mint, the New Orleans (O) mint, the Carson City (CC) mint and the Philadelphia mint.  Coins minted by the Philadelphia mint are the only coins that don’t contain a mint mark, and are some of the most commonly minted coins, so it’s common for most Morgan silver dollars to not contain mint marks.

The most commonly counterfeited coins are those issued by the San Francisco and Carson City mints. While some of the replicas are fairly high quality, a 10x triple magnifier will help to identify nuances between counterfeit stamped mint marks and authentic mint marks. Time doesn’t permit a detailed explanation between the two, but we’ll discuss some of the differences between these coins in a future article.

We hope that you found this post on how to identify fake Morgan silver dollars helpful, and welcome you to contact us if we can be of further assistance. In summary, the best way to avoid mistakenly purchasing a counterfeit Morgan silver dollar is to do your due diligence to identify a highly knowledgeable and reputable coin dealer. This may be a local or online coin dealer, so don’t rule out either option. 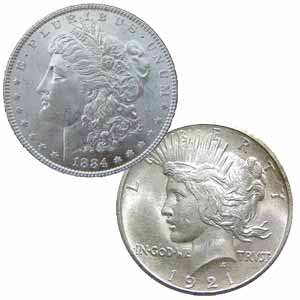