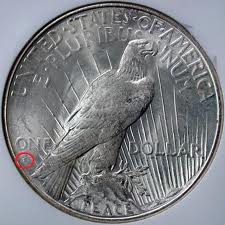 As coin dealers, we’re frequently asked to provide an estimated value of silver dollars based on the year of the coin. While the year of the coin can certainly impact the value, a greater determining factor is the coin’s mint mark, or where the coin was minted. You may have been asked in the past for the mint mark of your coin, and wondered where it was located and how it affects the value of your coin. If so, and you’re still not sure of the answer to these questions, then this article is for you!

For purposes of this article, we’ll be referring to Morgan silver dollars and Peace silver dollars, which were minted from 1878 – 1921 and 1921 – 1935, respectively. Both coins have an image of Lady Liberty on the front and an eagle on the back, but the location of the mint mark (if the coin has one) is located in different areas.

Now that we know where the mint mark is located and how to identify where the silver dollar was minted, the next step is to determine if you have a common date, semi key date, or key date coin. Most silver dollars had a mintage of well into the millions, making them common date coins. Some had a lower mintage (one to two million), and are typically referred to as semi key date coins, while others had a mintage of less than a million, and are typically referred to as key date or rare coins.

In summary, the year of mintage of your Morgan or Peace silver dollar only tells half the story. The mint at which the coin was produced is the key factor in determining whether you have a common date, semi key date, or rare silver dollar on your hands. Remember that not all silver dollars contain a mint mark, and if by chance you happen to be lucky enough to come across an 1895 Morgan silver dollar without a mint mark, you likely have a five figure coin in your possession. The other Morgan and Peace silver dollars highlighted above also have values that well exceed the silver content of your coins.

3 Famous Coin Collections From Around the World