How to Sell Silver Dollars in Atlanta for Top Dollar

Once you’ve determined if you have circulated or uncirculated coins, the next step is to determine where your silver dollars were minted. The “mint mark” on the coin will reveal where your coins were minted. The mint mark can be found on the reverse side of both types of silver dollars; below the eagle’s tail feathers on the Morgan silver dollar and below the word “ONE” on the Peace dollar. Some mints were known for producing fewer coins than other mints, and in some cases, the amount produced were in such limited number, that the coins are considered to be key date or low mintage coins.

In summary, knowledge is power, so the more time you take educating yourself, the more likely you are to learn how to sell silver dollars in Atlanta for top dollar. Once you’ve identified the type of silver dollars that are in your collection, assessed the condition of the coins, determined where they were minted, and obtained the mintage of your coins, you’ve be well on your way to receiving the full value of your coins. Lastly, you should only deal with reputable silver coin dealers, as these individuals are most likely to be transparent in their dealings, offer you a fair price for your coins, walk you through the entire process, and answer any questions that you might have. 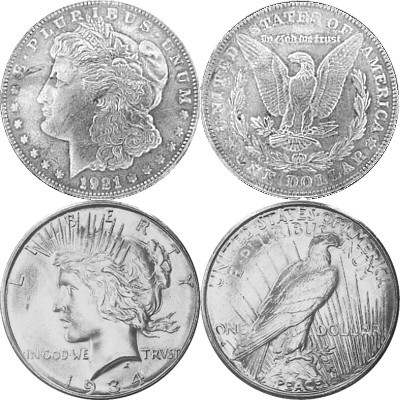