How to Tell the Difference Between the Size and Value of U.S. Gold Coins

One year later, the Mint introduced the $2.50 quarter eagle. However, it was another 54 years before the iconic $20 double eagles (aka – $20 Liberty) was put into production. Over the years there have been many different types of U.S. minted gold coins with many different reference names such as eagles, double eagles, Liberty Heads, St. Gaudens, Indian Heads, etc. it can often be confusing for investors and collectors alike as to which type of gold coins you may have in your collection.

As a leading gold coin dealer in Atlanta, we frequently hear from individuals that are interested in selling their U.S. gold coins, but oftentimes there’s a disconnect between the type of coin an individual has available for sale and the coin that they’ve attempted to describe to us.  This isn’t completely unexpected, especially for individuals that are new to buying or selling gold coins. To make it even more confusing, some coins can have the same face value but differing purities and gold content, based on the year in which the coins were minted. Hopefully we can help clear up some confusion by providing a brief history of some of the most frequently bought and sold U.S. minted gold coins, as well as offer some insight for sellers of gold coins who may benefit from this information and increase their chances of a successful transaction.

You can’t have a discussion of U.S.-minted gold coins without mentioning the word “Liberty.” Not only is the term “Liberty” deeply associated with our nation’s history and is known as a symbol of freedom, but the image of Lady Liberty is prominently featured on most U.S gold coins. While there are various images of Lady Liberty that adorn most U.S. minted coins, both old and new, only one series of coins are technically referred to as Liberty coins. In fact, they’re more commonly referred to as Liberty Head gold coins.

We’ve broken down the four primary types of Liberty Head gold coins by denomination, weight and their mint date ranges for easy reference when it comes to identifying if you have any Liberty gold coins in your collection. Each coin is composed of 90% gold and was used as legal tender until 1933.

The St. Gaudens Double Eagle is quite possibly the most beautiful U.S. gold coin ever minted. It’s also well recognized throughout the world and is sought after by coin collectors and gold bullion investors alike. The face value of the coin states $20, and the gold content is slightly less than one troy ounce of gold. The obverse (front) of the coin features a front profile of Lady Liberty walking with a staff in hand, and the reverse displays a side profile of a flying eagle. These coins were minted from 1907 – 1933, after which time the U.S. made it illegal to own and use gold bullion coins as legal tender.

1933 appears to be an arbitrary date, but it’s historically significant. On April 5, 1933, President Franklin Delano Roosevelt signed into law Executive Order 6102 making it illegal for U.S. citizens to possess gold coins. The Saint Gaudens coins minted in 1933 were intended to be melted down, but a few made their way out of the U.S. Mint. The few that exist today are incredibly rare and valuable. At the time of this writing, the auction record price for this coin is an astonishing $19 million, which was set in June of 2021. 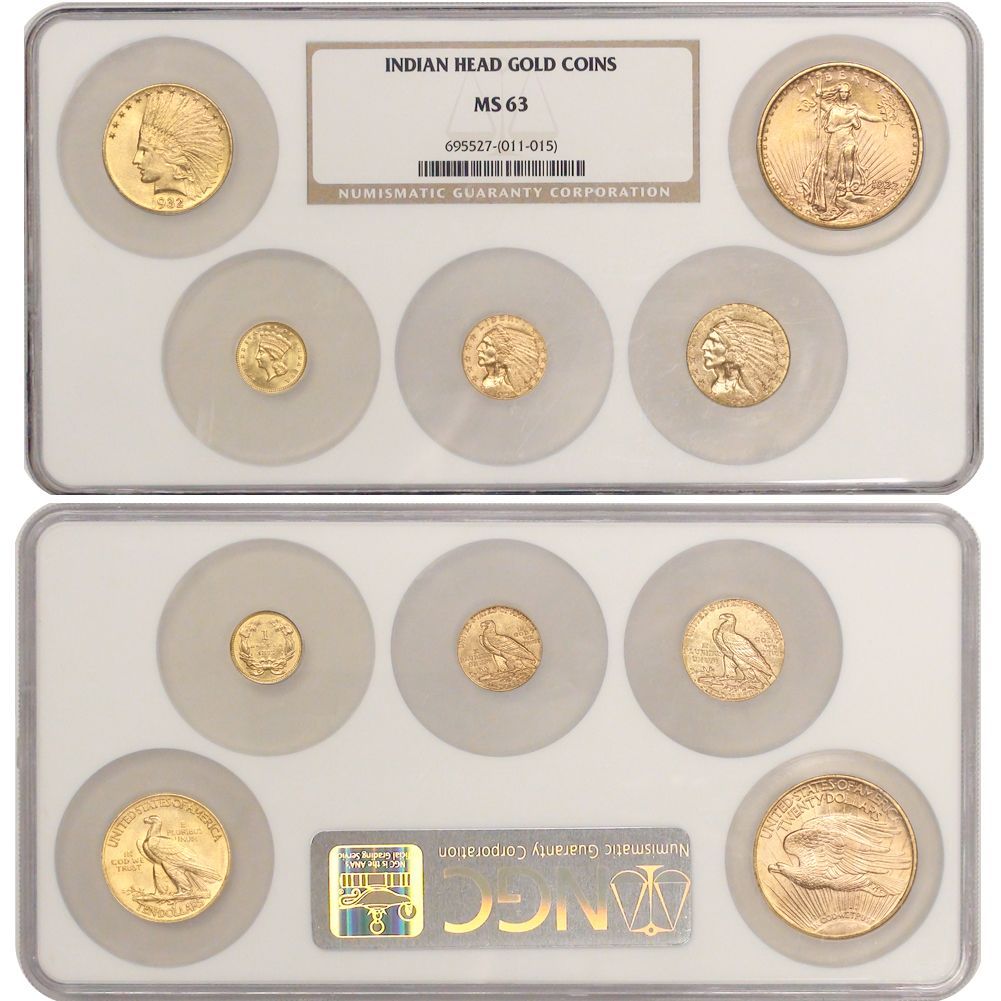 The $2.50 Indian Head coin is the most popular and typically contains more collectible or numismatic value than the larger denomination coins.

While the $5 Indian Head coin also has some collectible value, the $10 Indian Head gold coin tends to trade closer to its gold value, unless you happen to have a key date coin or an uncirculated specimen.

In 1984, the summer Olympics were held in Los Angeles. In celebration, and to help raise funds for the Olympic Committee that year, the U.S. Mint produced the first modern-era commemorative coin. That first set included two silver dollars and a $10 gold piece. The new $10 gold piece was made at the same weight and alloy specifications as the original $10 Indian Head coin that was last minted in 1933.

The Olympic $10 gold commemorative piece was also the 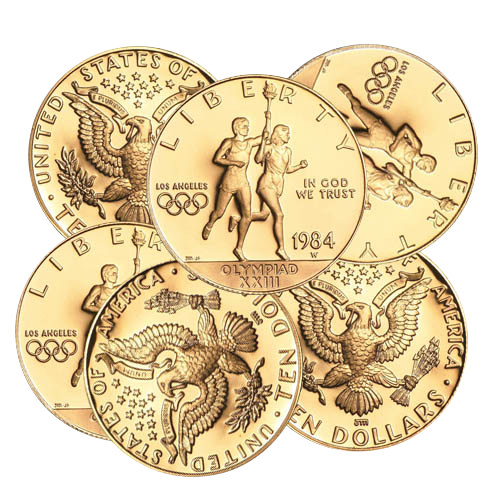 first U.S. coin to bear the “W” mintmark from the West Point, NY mint. In 1986, the U.S. Mint introduced the $5 commemorative coins as well, which contain the same specifications as $5 Indian Head coins.

Since then, there have been annual commemorative $5 gold coins produced as well as a couple of $10 gold coins, including a 2000 Library of Congress $10 bi-metallic gold and platinum coin. Most commemorative coins are designed to commemorate a specific event or historical anniversary and so they have some historical significance.

The design changes each year but is only produced as $5 or $10 face value coins.

Overall, demand for these particular coins has been mixed.

Those with higher mintage numbers have little more than their metal value while others with lower mintage numbers fetch higher premiums. Plus, because these were meant to be commemorative pieces, these coins typically see little to no circulation and are often in uncirculated condition.

Another potentially confusing aspect of these coins is that they depict the same obverse or front-side image as the iconic Saint Gaudens double eagle coin that we discussed earlier. However, the reverse side of the American gold eagle differs from the St Gaudens.

Up until 2021, it featured a bald eagle with an olive branch in its talons flying toward a nest. The new image introduced in 2021 depicts a left-facing side profile of the head of a bald eagle.

The inaugural year of production for these beautiful bullion coins was 1986 and they have been in production annually ever since.

Four denominations of these coins exist as well and include the $5, $10, $25 and $50 gold coins. While these coins can be used as legal tender, as was the case with the aforementioned coins, the gold value of the coins well exceeds their face values, so it would be in your best interest to sell your gold eagles for the gold value as opposed to the face value.

While some of the denominations of American gold eagles are similar to the earlier U.S.-minted gold coins, the gold content varies accordingly.

The four denominations of gold eagles and their respective fine gold content are as follows:

Oddly enough, one of the more common errors made is with respect to the $5 American gold eagle, as it’s frequently confused with the $5 Liberty Head gold coin despite the obvious design differences. This can be an unexpected, and unwanted surprise, especially when you’re expecting to be paid the equivalent of a quarter ounce of gold only to have your in-person offer be for a 1/10 ounce gold coin.

It’s important to understand the types of gold coins that you have in your possession and how they translate into the gold weight before selling. Also, pay special attention to the features noted above, and when in doubt, provide the date of the coin and the face value to your gold coin dealer. By doing so, it will help alleviate any doubt as to the type of coin that you have in your possession and can help manage your expectations when the time comes to sell.

Tony Davis
PrevPreviousGold and Silver Coins: Are they Replacing the Dollar?
NextIs a More Accurate Gauge of Gold and Silver Bullion Prices on the Way?Next