Seated Liberty silver dollars offer an exciting quest for coin collectors. That’s true whether you want to add a single silver coin to your collection or have a goal of assembling a complete collection. This iconic coin is not only interesting, but it has exceptional value in better condition as well.

Here’s what makes this coin worth collecting and why it’s valued highly by coin enthusiasts and coin appraisers alike.

What does it mean to say that Seated Liberty silver dollars are iconic?

Something that is iconic is widely recognized and acknowledged for its excellence. It’s well known and popular, especially among coin collectors. As one would imagine, being minted from 1839-1891, there are a limited number of coins in high end condition. The rarity of this coin is one of the most exciting elements when it comes to adding a Seated Liberty silver dollar to your collection.

Besides its collector’s value, it is a popular US type coin due to its 90% silver content. Also, like many other coins minted in the 1800s and early 1900s, Seated liberty coins minted at the Carson City Mint are especially popular and tend to trade at higher values.

If a coin is iconic, then it is a distinctive coin that stands apart from ordinary coins. People in the know appreciate the history, design, and value of this silver dollar.

In the first decades after the initial Coin Act of 1792, silver dollars were only struck when individuals supplied the precious metal, and they received coins in return. Yet, in 1804, the production of silver dollars stopped.

The biggest problem with silver dollars at that time was that in many cases the value of the precious metal was higher than the face value of the coin. This led people to melt them, cut them up, or sell them to people in other countries. At those times, the US Mint was making coins and seeing no benefit for the people of the United States of America.

Then, two years later, President Thomas Jefferson made it official – no new silver dollars would be struck for the foreseeable future.

However, in 1831, President Andrew Jackson approved the minting of new silver dollars, which were finally struck starting in 1836. With President Jackson’s approval, production was ramped up to full scale in 1840.

Where does the Seated Liberty silver coin fit into this picture?

The United States Mint began minting this silver dollar in 1840 and continued through 1873. One interesting historical note is that the motto “In God We Trust” was added in 1866 and was also added to other U.S. coins about that time.

After 1873, the Mint stopped making coins for circulation in the United States and switched to trade dollars intended for foreign trade. After that, in 1878, the Mint began producing silver coins for use in the U.S. again, starting with the Morgan silver dollar.

Chief Engraver Christian Gobrecht was the designer of the Seated Liberty silver dollar obverse, but his image had been used earlier. It graced the front of what was known as the Gobrecht Dollar, starting in 1836.

The next year, a different version of the same design was used on the half dime, quarter, and half-dollar coin.

This original design was based on instructions from the then Mint Director, Robert M. Patterson. The director

wanted a coin that would show Lady Liberty seated on a rock and holding a type of cap that was given by the Romans to their freed slaves. This task was first given to Thomas Sully, but Gobrecht created the design later.

Gobrecht’s obverse design was used again for the Seated Liberty silver dollars, but his reverse design of a flying eagle was replaced with John Reich’s earlier design of a left-facing perched eagle with a shield in front.

The obverse of the Seated Liberty silver dollars shows Lady Liberty sitting on a large rock. She holds up a pole. On the pole is a liberty cap. In her right hand, she holds a shield. On it, you will see the word “Liberty.” Above this image are thirteen stars, and below is the date.

On the reverse is an eagle perched atop an olive branch. The eagle holds arrows. Above the image are the words “UNITED STATES OF AMERICA.” Below, the face value is written as “ONE DOL.”

During the years (1840-1873) when the Seated Liberty dollar was minted, a total mintage of 6,487,747 of these coins was struck for circulation. Of these, the majority were struck at the Philadelphia Mint, with 5,465,463 coins minted there.

The coins minted at Carson City – a total mintage through all years of 18,584 – are now quite rare and popular among dedicated collectors. The San Francisco Mint made only 29,712 Seated Liberty silver dollars in all. The New Orleans mint produced the second highest number of coins after Philadelphia, minting 974,000 coins in all.

Knowing the coin facts will help you ensure you have or buy authentic Seated Liberty silver dollars. Examine, weigh, and measure to check the following coin details. If you still aren’t sure that they are real and not fake coins, ask your trusted precious metals dealer. 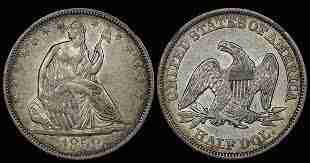 View a full set of the Seated Liberty Dollars HERE.

Seated Liberty silver dollars are not only iconic, but they are valuable, too, and they become more so as each year passes. Their precious metals value is insignificant compared to their collector’s value.

The value of Seated Liberty silver dollars can range from a couple hundreds dollars upwards of tens of thousands of dollars, if not more. The highest-priced silver coin is the 1870-S, one of the rarest among all collector coins. After all, only 12 were known to be made.

As we briefly discussed above, Carson City Seated Liberty silver one-dollar coins are also extremely valuable due to their low mintage. Coins in higher grades regularly trade in the tens of thousands of dollars, especially if they’re certified by NGC or PCGS. 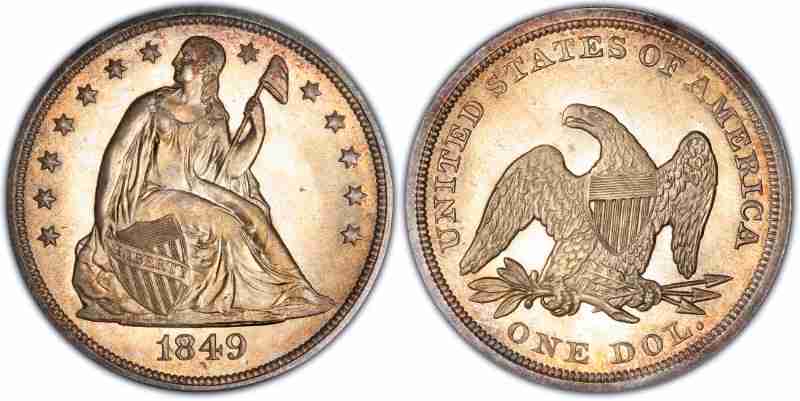 However, aside from their monetary value, many collectors admire them for their design and history.

Having a story to tell makes showing off your coins much more fun. For this, they can point to facts such as the origins of Gobrecht’s design or the addition of “In God We Trust” to this and other coins of its day. Plus, they can explain the rarity of these coins and their ever-increasing value.

Buying and selling Seated Liberty silver dollars takes persistence. Many of the issues are extremely rare or, at best, hard to locate. That’s why working with a rare coin expert makes sense. At Atlanta Gold & Coin Buyers, we call on our vast network of industry insiders to locate the specific coin you want.

We regularly carry many types of silver dollars, such as the Seated Liberty dollar, in our inventory for you to purchase. If a coin that you are looking for is out of stock, definitely sign up for notifications as we do update our inventory regularly!

If we sell you a silver dollar of any kind, we offer transparent and fair pricing. With our coin experts on the job, we can ensure that you will receive an authentic example of the Seated Liberty dollar you seek.

We also purchase a wide range of silver, gold, platinum, and palladium coins and bullion! We offer mail in services or you can call to schedule an appointment to sell to us in person. To offer as much transparency as possible, we list our up to date buying rates on our website as well.

Contact us today via phone or email to learn more about buying and/or selling coins and bullion with your local coin dealer, Atlanta Gold & Coin Buyers. We look forward to helping you with your coin collecting goals!

Tony Davis
PrevPreviousInherited a Coin Collection, Should I Keep or Sell? 5 Factors to Consider
NextBuying & Selling Gold Bars – Everything You Wanted to KnowNext