While the standard U.S. coins have remained the same for decades, many less common coins have been discontinued and are now obsolete. Those interested in collecting rare coins should be on the lookout for these historic denominations. 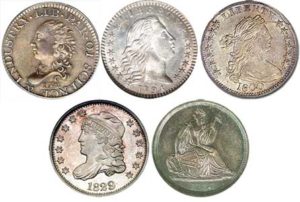 The term bullion describes coins that are composed entirely of gold, silver, or platinum and trade for their underlying metal content as opposed to any numismatic value. Four types of U.S. bullion coins are in existence: platinum eagles ($100), gold eagles ($50), silver eagles ($1), and gold buffaloes ($5, $10, $25, or $50). Additionally, palladium eagles ($25) are expected to be released in October 2017. While these coins are still legal tender, the metal used is worth much more than the coin’s face value. They can be purchased directly from authorized sellers.

These are among the most prevalent rare coins and were minted from 1792 until 1933. Technically, 1933 $20 gold coins were produced, but only a handful still exist. Most were melted after FDR signed Executive Order 6102, making it illegal for U.S. citizens to hold gold coins. Pre-1933 gold coins were produced in several denominations: the $20 double eagle, $10 eagle, $5 half-eagle, and $2.50 quarter-eagle. The denominations translate roughly to 1 oz, 1/2 oz, 1/4 oz and 1/10 oz gold coins.

This coin, similar to the quarter-eagle, was produced from 1854 to 1889 and served just one purpose: to provide an easy way for businesses to purchase 100 stamps in a single transaction. The coin was retired after the price of stamps rose above three cents each, and there was no longer much use for the three-dollar piece.

This coin has the dubious designation of having the shortest circulation in U.S. history, minted only from 1875 to 1878. It was designed to provide a roughly equal exchange with the French twenty-franc piece and was a similar size and weight. Because of the prevalence of the quarter, however, this coin quickly fell out of favor.

Made of silver, this five-cent piece was a predecessor of the nickel from 1792 to 1873. Nickel lobbyists began pushing for a new half dime made of nickel alloy; once the new nickel was introduced in 1866, the half-dime met its demise within just a few years.

Those interested in buying or selling rare coins can consult the trusted professionals at Atlanta Gold & Coin Buyers. We offer transparent buying rates and easy valuation both in person at our two offices in Midtown Atlanta or Johns Creek, or safely through the mail.

Tony Davis
PrevPreviousCaring for Numismatic Coins: A User’s Guide
NextWhy Is There Gold and Silver Money?Next