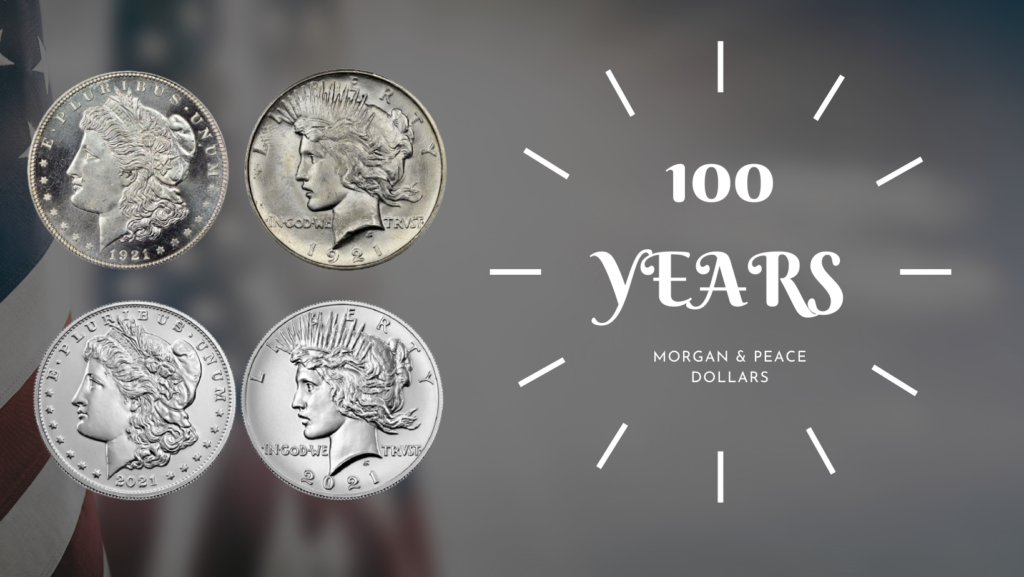 Mention that you have a 100-year-old coin, and most coin collectors will sit up and listen. While not all century-old coins are valuable, many can be worth a substantial sum.

Below, you’ll find a bit of history about 1921 silver, nickel, and copper coins, along with a few words about their value. When assessing the value of 1921 coins, as with any U.S. coin, it’s important to consider both the mintmark (or lack of mintmark) and the condition of the coin. 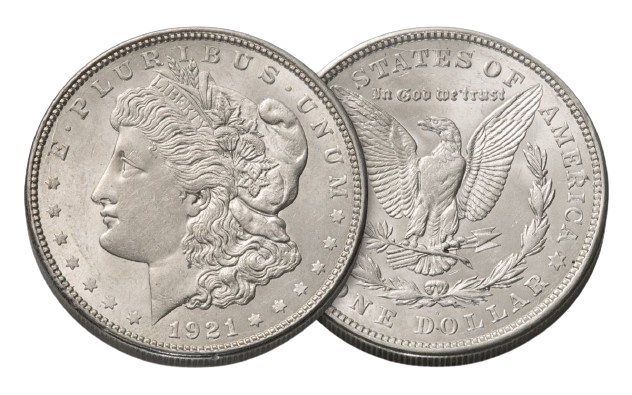 The first Morgan Dollars were minted from 1878 to 1904, then again only in 1921. The designer, George T. Morgan, wanted to make a coin depicting an American woman rather than the usual Greek figures. With Anna Willess Williams as his model, he created a stunning image. For the reverse, he studied nature to create an image of a realistic American eagle.

One hint when looking through any Morgan dollars that you may have already, keep an eye out for a “CC” mint mark. The Carson City mint produced many coins, but for the most part, produced the least amount of Morgan Dollars when compared to other mints in the United States of America.

This makes the 1921 Morgan-D Dollar an interesting find for coin collectors. However, a large supply of these coins still exists, so it is still an affordable coin to add to your collection.

The U.S. Mint honored the 100th Anniversary of the Morgan Dollar’s last year of minting with a brand-new 2021 Morgan Dollar. This new dollar was modeled after the original Morgan Dollar, using a combination of historical mint assets and new technology.

The United States Mint began production of the Peace Silver Dollar in December 1921 after the approval of Treasury Secretary Andrew Mellon. The new Peace dollar design was meant to commemorate the declaration of peace between the U.S. and Germany and to replace the Morgan Dollar. In this single month, just over 1 million Peace Dollars were minted.

1921 is actually a low mintage year, especially compared to the Morgan Dollar. Both the low mintage and the fact it was the first year for this coin contribute to this coin’s higher value. Furthermore, all 1921 Peace silver dollars were produced as high relief coins, providing nice contrast and a bold appearance.

Just as it did with the Morgan Dollar, the U.S. Mint produced an anniversary edition of the Peace Dollar. It is a beautiful coin and would be a great extra addition to a grouping of 1921 coins. Both coins feature “In God We Trust” and other iconic features of the Peace Silver Dollar.

If you look closely, you’ll notice that the spelling of the word “Trust” is used with the letter “v.” This isn’t an error, but rather was used to commemorate the United States’ victory in World War I.

If you have a 1921 Walking Liberty Half Dollar, you are in luck! It is a highly collectible coin. This coin was minted only in Philadelphia (no mintmark), Denver (D mintmark), and San Francisco (S mintmark).

The mintmark matters a lot with this coin. Mintages were lowest at the Denver Mint, making coins with the D mintmark more valuable.

The melt value for these 1921 coins is currently under ten dollars each. However, for a collector, the value can be significantly higher. For example, a 1921-S Walking Liberty Half Dollar in Very Good condition is worth over $40, while the same coin but with the D mintmark is worth almost four times that. 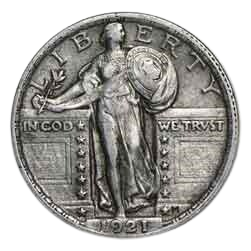 The Standing Liberty Quarter was a bit controversial when it first came out. The reason..? The image of Lady Liberty appeared with one breast bared. So, after the first two years – 1916 and 1917, the coin was redesigned to show the beloved icon wearing chainmail, which is how she appears on the 1921 coins.

The 1921 Standing Liberty Quarter is still one of the more valuable 1921 coins, however. Its melt value is currently a little less than $5, but its collector value is worth much more. This 1921 quarter is a very rare find for collectors. Less than 2 million of these coins were produced, making them one of the lowest minted Standing Liberty quarters.

Even in Very Good condition, it is worth about $150. It was only minted in Philadelphia, so there is no mintmark on any of these coins. In uncirculated condition, it could go for over $1000 at auction.

The Mercury Dime has always been a collectors’ favorite among 1921 coins. Adolph Weinman created the design of Winged Liberty, but it soon became known as the Mercury Dime because of the image’s similarity to the Roman god Mercury.

This silver dime is very small, so its worth is less than $2 if you melt it. However, as a collector item, it is worth far more. In Very Good condition, it is valued at over $70. In Uncirculated condition, it can be worth from $1,200 to $3,500 or more.

So, how does mintmark affect this coin’s value? The Mercury Dime without a mintmark, produced at the Philadelphia Mint, has significant collector value. However, those minted in Denver, the only other mint to produce them, are worth even more. Finding a decent quality 1921 Mercury Dime can be a challenge, but the reward makes it all worthwhile.

The Buffalo Nickel is another popular item among the 1921 coins for coin enthusiasts. Also called the Indian Head Nickel, this 5-cent coin was created by James Earle Fraser as a part of the Mint’s push to make American coins more beautiful.

Go to the Uncirculated condition, and the difference is even more astounding. These nickels from the Philadelphia Mint are $95, while those bearing the S mintmark are worth over $1,500. 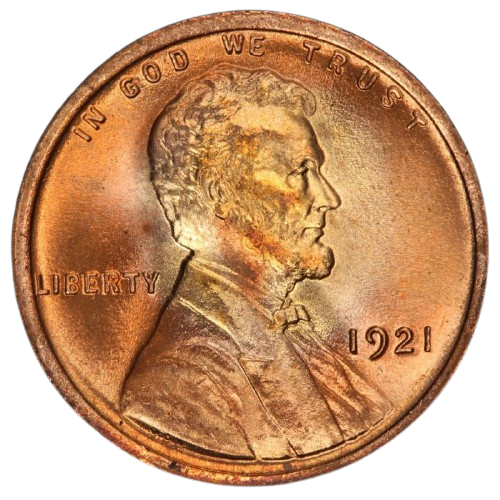 Many adults these days have fond childhood memories of sorting through their grandparents’ jar of pennies looking for wheat pennies. The Lincoln Wheat Penny is not only fun to collect, but in special cases, it can also be worth much more than you might think.

The 1921-S Wheat Pennies are rarer and so more valuable 1921 coins than those with no mintmark. Condition, of course, plays a part, with a higher-end condition coin valued at more than $100 and uncirculated coins going for hundreds of dollars or more.

One more thing to think about when evaluating copper coins is the color. Poor condition pennies can look brown, and better ones look orange. However, the best color is red. In fact, one penny, graded MS-68 Red by PCGS, sold for $36,000 in 2019.

There are also several error coins to consider among the 1921 pennies.

·        1921 Doubled Die Penny – both the inscription of E PLURIBUS UNUM and the wheat stalks appear doubled.

Old coins can be both interesting and valuable. Discovering that you have a rare and valuable 1921 coin could brighten your day and enhance your collection. However, it’s not always easy to determine what your coins are worth. In addition, if you are looking for specific 1921 coins, you may need help finding them.

Atlanta Gold & Coin Buyers can help! Our team of precious metals and coin experts is here to help you get the results you want. We provide accurate, fair, transparent pricing to ensure you know exactly why we priced your coin the way we did. We buy old and rare coins and pay among the highest rates in the industry.

In addition, we have many old American coins in our coin inventory and can help you find that special 1921 Peace or Morgan dollar. Contact us today to ask any questions you have about 1921 coins or request an estimate for a coin you have. We look forward to serving you!

Tony Davis
PrevPreviousSix Direct Questions to Ask When Requesting a Coin Appraisal
NextAre Certified Coins Worth The Expense? An Evaluation By Type of CoinNext