The History of Money

Before cash and credit cards, what did people use for money? Here’s a brief history of how currency came to be the way we know it today. 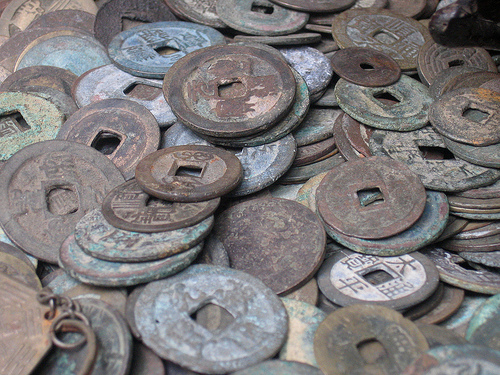 2500 BCE: Gold in Egypt and Mesopotamia

During the third millennium BCE, gold bars were commonly used as currency in Egypt, Mesopotamia, and surrounding areas. They were not standardized, however, so each bar had to be weighed to establish its value. Later, the system expanded to include gold rings for smaller sums. Rings were also used as portable currency as they could be worn for safekeeping. Around 2500 BCE, extensive trade was carried out in Ebla (modern-day Syria) using a gold and silver currency based on the bars and rings system.

700 BCE: Coins in Ephesus and China

Although Ephesus (modern-day Turkey) and China were fairly isolated from one another, they nonetheless developed the first coins around the same time. The Ephesians used a metal called electrum, which was a local alloy of gold and silver. A century later, the king of nearby Lydia became the first ruler to mint coins of pure silver and pure gold, rather than the Ephesian alloy. The pure coins quickly caught on in Greece and Persia.

Meanwhile, the Chinese began making their coins with a different method: pouring molten bronze into molds. The original bronze coins were fashioned into elaborate shapes, like a spade or a knife blade with a handle. This was because the bronze-casters were accustomed to crafting ritual vessels and other detailed creations. Later, Shi Huangdi, the first emperor of China, introduced round coins with a square hole in the middle. This design remained for the next two millennia.

China was also the first country to develop paper money, which they used for over 500 years, from the 9th through the 15th century. Unfortunately, the value of paper notes depreciated and inflation soared, leading to the disappearance of paper money around 1455. Many years later, it reappeared in Europe in the form of banknotes: certificates of exchange for physical coins held at a bank.

1816: The Gold Standard in England

Although banknotes had been used for many years before 1816, this was the first time that the notes’ worth was tied directly to gold. This allowed England to produce standard banknotes without the risk of inflation. In 1900, the United States followed in England’s footsteps with the Gold Standard Act.

The lifespan of the gold standard was relatively brief and was drastically altered by Franklin Delano Roosevelt (FDR) in 1933.  In 1933, FDR signed Executive Order 6102, which made it illegal for U.S. citizens to hoard gold coins, gold bullion, and gold certificates.  Citizens were required to redeem or exchange these items at the exchange rate of $20.67 an ounce.  Individuals that failed to exchange their gold coins, gold bullion and gold certificates by May 1, 1933 were subject to fines of up to $10,000 or up to 10 years imprisonment.  It was illegal for U.S. citizens to own gold bullion coins until 1974.  The one exception was for collectible or numismatic gold coins, which is one reason why some gold and bullion dealers focus on selling pre-1933 gold coins.  The assumption is if the U.S. once again made it illegal to hold gold coins that these items would be exempt from confiscation due to their collectible value.

For U.S. citizens, the gold standard for all intents and purposes ended in 1933.  However, the U.S. continued to exchange gold bullion for gold certificates from foreign central banks until 1971.  The Vietnam War was much longer and expensive than anticipated, which required the U.S. to run up large deficits and for the central bank to maintain a loose monetary policy.  As a result, inflation rates began heating up in the mid-1960’s.  Foreign central banks subsequently became concerned with higher levels of debt, increasing inflation rates and the strength of the dollar, choosing to exchange their gold certificates for gold bullion.  By 1971, the U.S. central bank had nearly a full-fledged run on their gold reserves.  As a result, President Nixon unilaterally closed the gold window and no longer agreed to exchange physical gold for gold certificates.  This resulted in even higher inflation rates, which Fed Chairman Paul Volcker is credited with battling and defeating during his term in office.

Money is viewed much differently today than in years past.  Gone are the days of carrying around 90% silver Morgan silver dollars and $20 gold pieces.  In fact, most people today don’t even use paper currency or coinage.  Rather, society has become comfortable with the use of credit and debit cards.  New technologies are constantly being introduced, such as Apple Pay and Google Pay.  Today, you can pay for groceries with a swipe of your phone, which is a concept that most people 20 years ago couldn’t conceive of.  One of the more interesting currencies that have been introduced in recent years is cryptocurrencies.  There are well over a thousand cryptocurrencies from which to choose, but the most recognized and popular is Bitcoin.  It uses a blockchain technology which allows individuals to bypass the banking system and conduct transactions anonymously.  The total market cap of cryptocurrencies is in the $500 billion range with end of year estimates expected to reach $1 trillion.  While this still falls well short of the equities and fixed income markets, cryptocurrencies are clearly a market to be reckoned with.

Do you live in the Atlanta area and want to know the value, or history, of your coins or bullion? If so, contact Atlanta Gold & Coin Buyers. We can evaluate your collection, as well as identify any rare or key date coins that you might have, to determine its worth.

Tony Davis
PrevPreviousThe Rarest Coins in the World
NextWhat’s the Difference Between Bullion and Numismatic Coins?Next