The History of Platinum Coins Being Used as Money

Though it has many industrial uses, platinum is also an attractive option for coins and bullion investors. As of August 2021, its spot price is $1,050 per ounce. Over the past few years, platinum has gained momentum as an investment-grade commodity, in part because it’s one of the rarest precious metals in the world. Here’s a look at the history of platinum’s role in currencies around the globe and how the current price of platinum compares to its historical value.

According to archaeologists, the first humans to mine and use platinum were the ancient Egyptians. One of the most famous platinum artifacts from this period is the Casket of Thebes, which is decorated with platinum, gold, and silver. Platinum’s alluring luster also captivated indigenous South American peoples, who incorporated platinum alloys in their jewelry and ornate decorations. 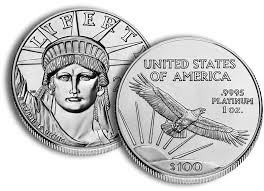 This shiny white metal wasn’t officially used as currency until the late 1820s when Russian miners in the Ural Mountains discovered platinum deposits. The first platinum coins were minted and circulated in Russia between 1828 and 1845. In 1988, the Royal Canadian Mint and the Australian Perth Mint began minting platinum coins (the Canadian Platinum Maple Leaf and the Platinum Koala, respectively). The United States introduced its first platinum coin, the American Platinum Eagle, in 1997. The US Mint has produced the American Platinum Eagle in denominations of $10, $25, $50, and $100. They ceased issuing four-coin platinum proof sets and fractional sizes in 2008, but have produced 1 oz proof platinum coins every year since its inaugural issue. The U.S. Mint also took a brief hiatus on the issuance of the 1 oz bullion coin from 2009–2013 and again in 2015.

As mentioned above, platinum historically has been primarily used as an industrial metal, so the price of platinum is oftentimes dictated by the strength of the economy. For example, when car manufacturers are producing more vehicles with catalytic converters, demand tends to be strong, resulting in higher prices. Alternatively, during recessions, the price of platinum tends to fall. Platinum’s all-time high of $2,270 was reached in March of 2008, which is more than double the current price of platinum. It also performed well in 2011 in response to loose monetary policies, when gold and silver prices reached $1,900 and $50, respectively. We should expect to see rising platinum prices as it continues to become more mainstream as an investment metal.

Platinum Coins You Should Invest in

If you’re looking to invest in domestic or foreign platinum coins, these are four options that are widely available and likely to serve as a good store of value:

Atlanta Gold & Coin Buyers offers coin investors the opportunity to buy and sell platinum bullion and coins online. With two locations in metro Atlanta, we’re happy to help you expand your collection or sell coins for liquidity. If you’re looking to sell platinum coins or bullion but don’t live close to Atlanta, we also offer a mail-in appraisal program through the USPS. Complete our contact form today to schedule an appointment with industry experts who offer competitive rates and transparent investment advice.