The Ultimate Guide on How to Calculate the Silver Value of U.S. Silver Coins 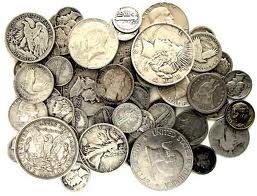 Sort your coins according to denomination and date. Sort and group all of your nickels dated between 1942 and 1945 together. Do the same for dimes, quarters and half dollars minted in 1964 and earlier, half dollars minted from 1965–1970, and U.S. dollar coins dated 1935 and earlier.  These coins contain various purities of silver and sell at different prices based on their demand.

Examine your nickels dated between 1942 and 1945. Some of the nickels that were minted during this time period contained 56 percent copper, 35 percent silver, and 9 percent manganese. The shift was made from nickel to silver during World War II because of the high value of nickel during that time. Look at the reverse side of the coin to verify if it’s a wartime silver nickel. If you find a large letter above Monticello’s image, the coin contains 35 percent silver. The letter or the mint mark on the coin tells you where the coin was made.  The calculation to obtain the current melt value of silver war nickels is as follows:

Gather your half dollars dated from 1965-1970. While the production of dimes and quarters containing silver ceased after 1964, this wasn’t the case with half dollars. Half dollars that were produced from 1965 through 1970 contained 60 percent copper and 40 percent silver. However, after 1970, the use of silver was completely eliminated from U.S. half dollars.  Use the following calculation to determine the silver value of your 40% silver half dollars:

Research the spot price of silver. This will tell you the current value of a troy ounce of silver in the commodities market. Live spot prices can be found on Kitco’s website at the following URL:  http://www.kitco.com/charts/livesilver.html.

While common-date U.S. silver coins may not be able to garner you as much cash as rarer coins, there’s still a large and active market for these coins.  Using the above guidelines will help you to determine the melt value of your coins to ensure that you receive a fair price when the time comes to sell your silver coins. Silver coin buyers engage in such transactions on a daily basis.