These Popular 90% Silver Coins Are Far from Junk 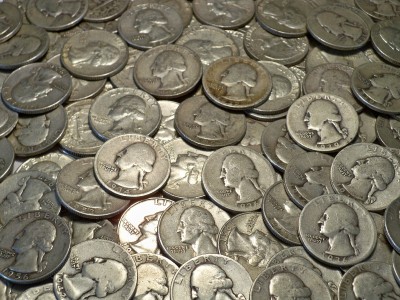 We have the privilege of regularly meeting with individuals who are making their first silver coin purchase.  As such, we frequently receive many of the same questions, as customers are not only concerned about their initial investment, but also the ability to sell or trade the coins if the time ever comes.  The initial inclination of many of our customers is to purchase one ounce silver coins or bullion, but for some reason 90% silver coins, which are commonly referred to as junk silver, aren’t a top of mind investment.  Certainly the term “junk” doesn’t have many positive connotations, but there’s also the concern that the coins aren’t pure silver.  We believe part of our responsibility is to educate customers on all of the silver investment options that are available and discuss the pros and cons of each.  The fact that the coins are 90% silver is seen as a drawback for some folks, but there are many positive features that shouldn’t be overlooked.  In this article, we’re going to highlight some of the positive aspects of 90% silver coins as an investment option and will show you why these previously circulated coins are for from “junk.”

One of the most appealing aspects of 90% silver coins is that they’re recognizable.  In fact, 90% silver dimes, quarters and half dollars minted in 1964 & earlier look identical to coinage used today.  The only difference is that the coins weigh slightly more, as they’re composed primarily of silver as opposed to nickel-copper, and they have solid silver edges, unlike post 1964 coins.  We all feel more comfortable with items that we’re familiar with, and the same holds true in the coin and numismatic industry.  One concern that some of our customers have is that 1964 Roosevelt dimes, Washington quarters and Kennedy half dollars may only be recognizable as silver coins by coin collectors.  If that’s one of your concerns, you might want to consider investing in coin types that were produced prior to this time, such as Mercury dimes, Standing Liberty quarters, Franklin half dollars and Walking Liberty half dollars.

First time silver coin buyers are especially concerned about the liquidity of their investment.  While in most cases, individuals are making a purchase as a long term investment, they want to know if there will be a broad and liquid market if the time ever comes to sell their silver coins.  As mentioned above, 90% silver coins are recognizable, which helps to increase the number of prospective buyers in the future.  Another positive is that 90% silver coins are government issued.  Most individuals that invest in silver coins feel slightly more comfortable purchasing coins that were government issued as opposed to privately produced silver rounds and bars.  That’s not to say there’s not a strong market for privately produced silver bullion as well; it’s just that there’s a slight preference toward government issued coinage.  Another aspect that makes 90% silver coins appealing is their size, which we’ll discuss next.

In general, most silver coin or bullion investment options begin at one ounce and go up from there.  At the time of this writing, the price of silver is roughly $16 an ounce, which makes these coins affordable to most folks.  However, in the past, the price of silver was much higher.  In fact, it topped out at $50 an ounce in 1980 and at $49 an ounce in April of 2011.  Some industry experts are calling for silver to rise to its previous high in the not too distant future, while other experts are of the opinion that the price of silver could reach $100 or more an ounce over the next few years.  At $100 an ounce, many individuals that are currently buying silver could no longer afford silver in larger denominations, or would have to substantially reduce the size of their future purchases.  A nice feature of 90% silver coins is that they’re fractional or smaller denomination coins.  It takes roughly 14 dimes, 5.6 quarters or 2.8 half dollars to equal a troy ounce of silver.  Even at $100 an ounce, a silver dime would only run approximately $7 a piece, which is within reach for most silver coin investors.

The size of 90% silver coins not only makes them affordable for more individuals, but also makes them ideal candidates for bartering.  Some of our customers purchase silver coins with the expectation that one day they will need to use them for bartering purposes.  They’re concerned about the ever increasing national debt, large annual deficits, the present value of the future unfunded liabilities (estimated to be over $200 trillion) and the loose monetary policies of the Federal Reserve.  They believe that these factors will ultimately contribute to the collapse of the dollar and that they will need to use silver coins for bartering purposes until a new currency can be established.  As mentioned above, some of the positive aspects of 90% silver coins are that they’re recognizable, liquid, government issued and fractional, all of which makes them good candidates for bartering.

Last, but not least, 90% silver coins are real money.  In other words, silver coins aren’t valuable because the government says that they’re money.  Currency issued today by the Treasury is fiat currency, which means that it’s not backed by gold, silver or any other commodity.  Rather, it relies on individuals having faith in the issuing government.  If for some reason individuals were to lose faith in the dollar, it would quickly depreciate in value.  On the other hand, silver has been used as money for thousands of years and is seen as being valuable by individuals around the world.  In this previous article that we wrote for Coin Week, we discussed the four characteristics of real money, which are durability, portability, divisibility and having intrinsic value.  Silver, as well as gold, meet these four characteristics and qualify as good candidates for other reasons, as we highlighted above.

In summary, we highlighted five reasons why we believe that 90% silver coins are good investment options.  First, they’re recognizable, as they look identical to coinage being used today.  Secondly, the fact that they’re recognizable makes them liquid, as individuals are comfortable purchasing items that they’re familiar with.  Third, their size makes them attractive, as they’re fractional and will likely remain affordable even if the price of silver rises substantially from current levels.  Fourth, their size makes them ideal candidates for bartering.  Last but not least, 90% silver coins have intrinsic value and are real money.  Silver has been viewed as money for thousands of years, and will likely continue to be viewed as such in the future.  As you can see, 90% silver coins are far from “junk.”  Consider an investment in these attractive coins today.