Off time - no update Tip of the Week: How to Know if Your Eisenhower Dollar Contains Silver

Tip of the Week: How to Know if Your Eisenhower Dollar Contains Silver

As coin dealers, we come across many different types of coins, but one of the most prevalent U.S. coins that we see are Eisenhower silver dollars.  As the name implies, these coins contain silver content, but that’s not always the case.

The Philadelphia and Denver mints produced Eisenhower silver dollars for general circulation.  These coins are clad, which are a combination of nickel and copper, and don’t contain any value above and beyond the face value of the coins.  However, the San Francisco Mint produced 40% silver Eisenhower dollars from 1971 – 1976 specifically for collectors.

The coins were only available through the San Francisco Mint through special order and were packaged in a blue envelope (uncirculated) a brown box (proof) or in a red envelope.  Even though they were special order coins, some 40% Eisenhower silver dollars still made their way into circulation.

Besides checking for an “S” mintmark on the obverse or front of the coin, collectors can check the edge of the coin for a copper stripe.  If a solid copper stripe exists, then one can assume that they have a clad Eisenhower silver dollar in their possession; however, if a solid silver stripe can be seen, then you likely have a 40% silver coin in your collection.

We hope that the above information on how to know if your Eisenhower dollar contains silver was helpful, and we welcome you to contact Atlanta Gold & Coin Buyers if we can be of any assistance in identifying your Eisenhower silver dollars, or for that matter, any other type of coin.  We look forward to hearing from you and earning your business! 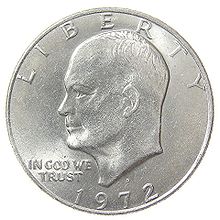