What is the Ideal Gold to Silver Ratio?

In his article entitled Making the Transition from Silver to Gold Al Doyle from Coinweek.com recommends that you first buy silver coins before accumulating gold coins; even if you have the financial means to purchase gold coins from the outset.  In the article, he addresses the historical gold to silver ratio, which prior to 1980 was 15/1 to 17/1 and how that compares to the current ratio, which at the time of this writing is 65/1.  Even after taking into consideration that silver coins are currently selling at higher premiums than gold coins, he notes that “the real world ratio is more like 55 to 1.”

Peter Schiff also highlighted in a recent piece on Streetinsider.com that silver appears to be an obvious buy for many reasons, including its numerous industrial uses, with new uses being developed annually.  He also makes note of the current favorable gold to silver price ratio and the fact that “only 11.2 times more silver than gold has ever been mined.”  Additionally, Lawrence Williams from Mineweb.com has made many of the same arguments in favor of silver in this article.

Considering that Doyle, Schiff, Williams and many other coin and precious metals experts are strongly recommending silver, including  this writer, does it appear that now is the ideal time to accumulate “poor man’s gold?”  The answer is a resounding “yes,” but not without first considering your personal gold to silver ratio, including your long term investment needs, goals and risk tolerance.

We’ll delve a bit further into the long term returns and volatility of both precious metals below, beginning with the returns of gold since 1974: 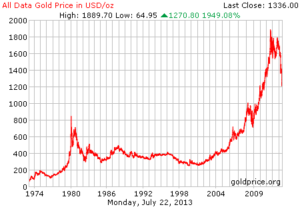 The price of gold peaked at $800 in 1980 in response to high inflation rates experienced during the Carter Administration, trading within a fairly narrow range until 2006, after which time we began to see a positive move in the direction of gold.

Let’s also take a look at the historical returns of silver since 1976: 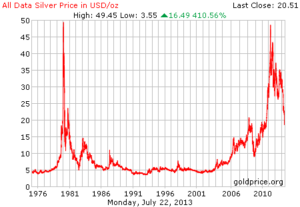 While silver likely would have performed well in 1980 due to high inflation rates, manipulation of the silver market by the Hunt Brothers caused the price of silver to spike to $50 an ounce.  Tighter monetary policy and margin changes caused the price of silver to subsequently drop off a cliff, falling all the way to $5 an ounce by 1982.  As was the case with gold, we began to see upward movement again in 2006 just before the global financial meltdown.

While both metals have performed well during the selected date ranges, returns shouldn’t be viewed in isolation.  The volatility, also known as standard deviation should also be taken into consideration.  Below is a chart that shows the annual returns as well as the yearly change of returns in the price of gold and silver over the past 20+ years:

What we can interpret from the above chart is that the long term returns of gold and silver have both been favorable; however, the volatility of silver has been higher.  This means that the risk averse investor should consider investing a larger part of their precious metals allocation in gold.  One the flip side, because silver has higher volatility, it also has the potential for higher returns.  Silver also oftentimes benefits from what is known as the “slingshot effect” in that silver tends to move in the same direction as gold, but at an accelerated rate.  When gold is performing well, silver tends to outperform and vice versa.

In summary, at the moment, a strong case can be made for investing in gold and silver; especially at the currently depressed prices.  However, gold and silver shouldn’t be viewed in isolation, but rather on a portfolio basis.  Consider not only the price, but also the volatility of each asset prior to delving into the market.  Keep in mind that gold is more stable, and therefore is more likely to be attractive to risk averse investors, while silver provides the opportunity for more upside potential.  Regardless of which ratio you choose, gold and silver will likely continue to be strong performers in the months and years to come.