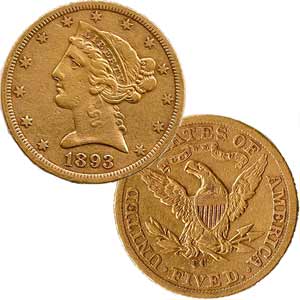 Atlanta Gold & Coin Buyers, one of Atlanta’s premier coin dealers, is most well known for the large volume of modern U.S. gold & silver coins, including bars, rounds, and bullion that we regularly buy and sell; however, we also do a substantial amount of business with respect to old, rare and numismatic coins. In fact, we have a large selection of pre-1933 U.S. gold coins available for sale that we’re selling at industry leading prices.

The categorization of pre-1933 gold coins derives from an executive order signed by FDR in 1933 making it illegal for U.S. citizens to possess gold coins. Citizens were required to voluntarily turn in their gold bullion coins due to an “economic emergency” resulting from the Great Depression, and in turn, were provided with an equivalent amount of U.S. Treasury notes. Common denominations include $2.50, $3, $5, $10 & $20 gold coins.

One reason why many individuals are interested in pre-1933 U.S. gold coins is due to the collectible or numismatic value of the coins. While you should always be cognizant of the premiums that you pay for old and rare gold coins, if you’re able to acquire them at close to standard gold bullion rates, this appears to be a wise investment. Pre-1933 U.S. gold coins don’t appear to be as volatile as gold bullion coins, so the relative stability in price of these coins is a factor that makes them appealing.

Not only do we have a wide variety of pre-1933 U.S. gold coins in stock, but we also regularly purchase pre-1933 gold coins, so whether you’re in the market to buy or sell Indian Head, Liberty Head, or St. Gaudens gold coins, we would love the opportunity to do business with you. Contact us today at 404-236-9744 or via e-mail at sales@atlantagoldandcoin.com to schedule an appointment. We look forward to hearing from you and earning your business!

Tony Davis
PrevPreviousWhat is Causing the Price of Gold and Silver to Go Up?
NextBeware of fake gold and silver coins, bars and bullionNext